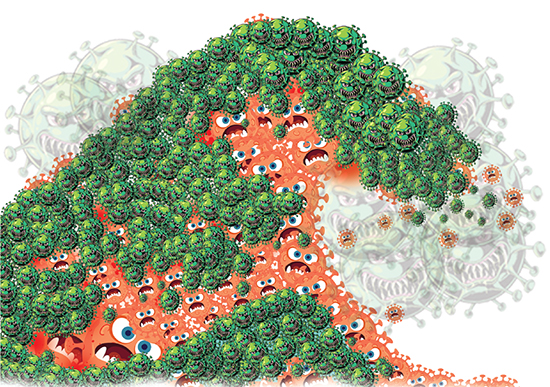 There had been a major hiatus of “systems thinking,” relevant expertise, and leadership, of managing COVID-19 in Sri Lanka that continues to date. These not only led to economic collapse, but also to miss the ongoing community spread during the past few months and the current upsurge of uncontrolled, second wave of COVID-19 started in mid-August 2020. The entire country (24 out of 25 districts) has been affected with multiple community clusters, except in Kilinochchi district.

Brandix event that started in Minuwangoda was just one of many recent clusters, of the ongoing community spread of COVID-19, which the Health Department failed to diagnose. The latter was in part due to using weak and disjointed strategies, the reliance of military-style wasteful curfews, arrogantly refusing to conduct PCR testing in the community (until very recently), inhumane quarantining, and failure to consult Sri Lankans with practical expertise in handling epidemics.

The mentioned approach by the COVID-Task Force led to the failure of diagnosing infected people in the community, and therefore, since June 2020 unwittingly allowing the community spread of COVID-19 across the country. Apparently, they were not aware of it, as mentioned above, PCR testing was not performed in the community. It is noteworthy that, the failure to detect COVID-19 during the past few months is not equivalent to, not having community spread. “Absence of evidence” (i.e., lack of PCR testing) is not the same as “evidence of absence” of a disease.

It is a futile attempt by the Task Force and government spoke person to deny the ongoing COVID-19 community spread; the majority of people in the country are aware that is not true. Using modelling, such as reproduction number and by other data, the author predicted in the first week of June 2020, an impending second wave of COVID-19 in Sri Lanka commencing in mid-August. He also predicted that the numbers of PCR positive persons would double, every 7 to 10 days: both materialized.

The responsibility for the failure to control the current community spread of COVID-19 is firmly with the Task Force and the administrators of the health department. There has been a series of errors from the beginning, that still continue. These include but are not limited to, lack of tangible, effective, and realistic strategy and vision, conceit, and the refusal to consult relevant experts, and misleading the public. These issues were exacerbated by the lack of understanding the biology, the importance of natural immunity and ways to enhance it, underlying mechanisms of the spread of the disease, and importantly, the unacquaintance of how to prevent the spread of viral epidemic (particularly COVID-19) and protecting the public.

The government should not keep punishing people, instead, it should help them:

Despite serious hardships to the population, it seems that no lessons were learned from the previous six months and the extended, draconian curfews in Sri Lanka. Consequently, the government is taking the same failed approaches today. Moreover, it has now opted to punish people, rather than guiding, and helping them. The current approach by the government not only ineffective but also inhumane and unethical. One such example is the recently gazetted order by the health minister, designed to punish people, which is highly inappropriate for Sri Lanka. Surprisingly, no one has challenged it through the Courts, to date.

It has become clear that the only solution that the Task Force had to control the COVID-19 epidemic in Sri Lanka is (and still is) to enforce a worthless and destructive curfew for extended periods. COVID-19 virus does not understand nor cares about curfews nor whether it is enforced on day or night, to deciding to infect people. Infectivity is based on behaviour of people and the degree of immunity of individuals and the population. Neither of these is modified or improved by the punitive actions taken by the government. Moreover, it failed to incorporate the established disease prevention structure in the country. For example, the full involvement of Public Health Inspectors, district and council systems, and the Government Agents in each of the 25 districts; instead, many of these officials were marginalized.

Using the curfew to punish people will not solve the problem:

Law enforcement using the curfew as an excuse for intrusion into people’s homes and lives, under the guise of contact tracing. The contact tracing, which is an important part of the prevention of viral spread is currently performed as a military manoeuvre rather than per the ordinance. Contact tracing is intended to identify, inform, help people, and safeguard the community from the potential viral spread.

While contact tracing and quarantining are necessary to control the spread of the disease, it must be done in a humane manner to help people. Instead, the current practice of harassing and punishing people; capturing, transporting, and placing them with strangers in quarantine centres, without social distancing are against our culture and is highly unethical. Treating these citizens, of whom the vast majority do not have COVID-19, as enemies should not be tolerated; and must be objected to through the Courts.

It seems that the law-enforcing administrators have adopted a “wrongful attitude” to the contact tracing; army teams carry out orders using, “search and arrest” protocol. The stresses created through this damming protocol continuously harming thousands of people, mentally and physically: not only in the index cases but also their families and neighbours. The acute stresses-related harm created, could last for years or even be permanent in some of the affected people. Examples of such include development of severe depression and posttraumatic stress disorder (PTSD). Law enforcement must stop treating innocent fellow citizens as criminals by using the “curfewquarantine” excuse.