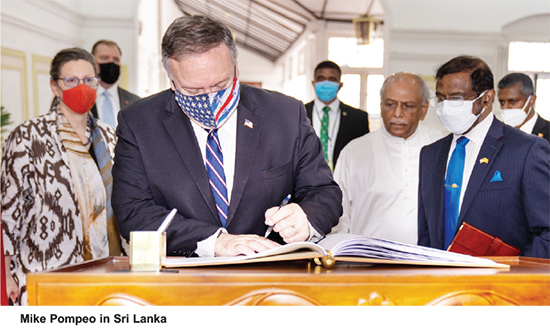 In fact, a military alliance between the US and Sri Lanka already exists. By signing ACSA in 2007, and renewing it in 2017, Sri Lanka committed its strategic entry points – ports and airports, our armed forces, our military installations, food, oil, and spare parts, to the US for its war against China.

The current regime seems to be pursuing the same policies as Yahapalana, but is doing so by resorting to coded language, because before the elections certain members of the present government stood up against the US defense agreements – ACSA, SOFA, and MCC – and because the majority of our people are clearly against engaging their country, their armed forces, their people, and their resources to fight America’s war against China. In fact, by being given positions in government, the loudest opponents to America’s military project have been neutralised and effectively silenced, making it even easier for Washington to accelerate its agenda.

During the recent visit of the US Secretary of State Mike Pompeo, the government is stated to have reiterated its commitment to a “free and open Indo-Pacific”. Now that’s one heavily coded expression for war against China. The US Indo-Pacific strategy was initially to contain China through engagement. Today, it is to achieve regime change in China, militarily. In fact, there is no such thing as an ‘Indo-Pacific’, except in America’s vision for a unilateral world without China, a world without Asia, a world in which ‘Asian-ness’ will no longer be an obstacle to its global hegemony.

The other code word the current government is utilising to dissimulate strengthening Sri Lanka’s military alliance with the US is ‘neutrality’. Tagging on to it ‘non-alignment’ only serves to mislead. Non alignment is based on principles, it stands for among other things non-aggression, non intervention, sovereignty, territorial integrity, cooperation, and multilateralism. That is completely the opposite of what America’s Indo-Pacific strategy is about.

Non alignment is an anti-colonial and anti-imperialist movement. It does not remain neutral where freedom of a nation is threatened, but joins non military alliances, in accordance with the Charter of the United Nations, to combat threats of foreign domination and aggression. It rejects joining any US-led military alliance. Speaking at 1955 Asian-African Conference in Bandung, India’s Prime Minister Jawaharlal Nehru energetically opposed US-led collective defensive pacts in Asia and the Middle East, arguing that joining would only result in demeaning oneself to role of “camp-follower of others” and “hangers on”, and lead to loss of freedom and individuality,”an intolerable thought … that the great countries of Asia and Africa should come out of bondage into freedom only to degrade themselves or humiliate themselves in this way.”