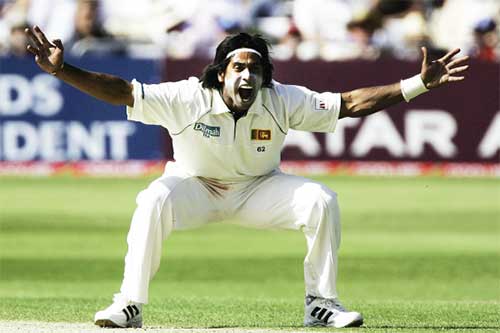 Chaminda Vaas was Mathews’ hero at school. He has been one ever since, as Mathews shares his views on Vaas to ESPN.

“When I think back to my early days in school, there was one name that monopolised our conversations: Chaminda Vaas. I must have been about seven when he made his debut for Sri Lanka. Up until then I had looked up to my brother and my father in terms of sporting idols, but it wasn’t long before Vaas aiya dominated my thoughts.

In Sri Lanka, school cricket is considerably more popular than the club game, and now Vaas, a star from our school, St Joseph’s, was playing for the national side. It didn’t really get much bigger than that. I was around nine when Sri Lanka won the World Cup. To see him lift that trophy is something I’ll never forget. Yes, it was amazing for all Sri Lankans, but to see a fellow Josephian hoisting that trophy high was an unbelievable feeling; I knew then that I wanted to follow his path.

My only regret is that I was too young to have seen him play in our school colours. I was born in 1987 and I think Vaas aiya played his last school game around 1990. But he did return to the school regularly to help out and mentor the players, which highlighted the sort of character he was.

It was during those visits that I first met him; he was the first international cricketer I had seen in the flesh. And all these years later, he’s still the benchmark for the sort of professional I want to be.

He placed a lot of emphasis on hard work and fitness during his pep talks. But more than anything it was way he handled himself that inspired me. I still remember how he would come to the college to do some of his fitness stuff straight after an international tour. The commitment I saw in him has stayed with me to this day; I knew that if I was ever going to reach the top I needed to work as hard as he did.

His humble nature also translated to the type of cricketer he was; for much of his career he just held up one end, keeping things tight while Murali picked up wickets at the other end. But when you look at his career, his longevity was unbelievable. An Asian seamer playing over 100 Tests and 300 ODIs, and picking up over 750 international wickets – a lot of which came in subcontinental conditions – is an incredible feat.

I was never as skilled as him, but watching him I saw how much you could achieve by just hitting your lengths and keeping things tight. So even though I was never blessed with pace, I always looked to do something similar when I had the ball in hand – hold one end up and create pressure so that my team-mates could pick up wickets at the other. Every team needs a player like that.

I was fortunate enough at the start of my international career to play alongside him. As a team-mate, in the dressing room he wouldn’t talk much, but he would always share his experiences and help you out if you needed it. He led through action more than words. The training he did was phenomenal, as were his overall fitness levels. He was always running at the front of the pack, always looking to improve.

As a young cricketer watching him improve his batting in the twilight of his career also served as motivation for me to become an all-rounder. That really summed him up – always looking to improve, and hell-bent on maximising every ounce of potential. I just hope that I can inspire the next generation in the same way he inspired me.”