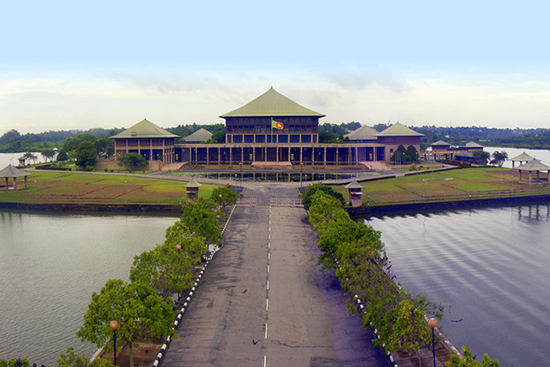 That the 20th Amendment was passed does not come as a surprise. That some opposition MPs voted with the government also does not come as a surprise and neither does the fact that the unity of the governing coalition held during the voting despite the sparring between constituent sections of the government that had been going on for weeks over some provisions of the Amendment. What was surprising however was the manner in which some constitutional shibboleths of the past went into oblivion silently and almost unnoticed. The carcasses of several constitutional holy cows of the past can literally be seen lying dead on the streets.

When the 20th Amendment to the Constitution was first Gazetted as a Bill, this writer stated that some of the changes envisaged in that Amendment were urgent and could not wait until a new Constitution was drafted. Foremost among these was the abolition of the Constitutional Council which had the final say in making important appointments to high state positions like the Attorney General, the IGP and the Judges of the higher judiciary as well as the bodies like the Elections Commission, the Public Services Commission, and the Police Commission. Even after a presidential election and a parliamentary election, and the complete rout of the yahapalana political parties, five of the eight remaining members of the Constitutional Council (after the resignation of one member and the defeat of yet another member at the parliamentary elections) were yahapalanites who would have the final say in making all important state appointments until October 2021.

The tautological absurdity of taking the power to make appointments to important state positions away from the President and away from Parliament and giving it to outsiders who however were appointed by the political parties in Parliament was lost on the proponents of the 17th Amendment – so firmly held was the view that elected politicians should not have a say in making important appointments to state positions. The prejudice seemed to be against elected representatives of the people. So long as you were not an elected representative it did not matter even if the members of the Constitutional Council were hangers on and nominees of political parties! When the 19th Amendment reintroduced the Constitutional Council in 2015, the proportion of parliamentarians to outsiders was reversed and it had seven Parliamentarians and only three outsiders, thanks to the furious resistance of the UPFA and its allies. If the yahapalanites had had their way, the Constitutional Council established by the 19th amendment would also have had only three Parliamentarians as against seven unelected outsiders.

Even Karu Jayasuriya who Chaired the yahapalana Constitutional Council in his capacity as the Speaker and who obviously reveled in that role, did seem not come to the defence of the Constitutional Council in a major way, choosing instead according to some news reports, to oppose the 20th Amendment on the slogan of preventing dual citizens from becoming elected representatives of the people. Thus died a misconceived institution. On the one hand we talk of democracy and free and a fair elections, but try to argue that somehow, those who are democratically elected to positions of power should not be trusted with making appointments to important state positions and the power to make such appointments should as far as possible be given to unelected persons. Hopefully this is the last we hear of harebrained mechanisms like the Constitutional Council.

This was a matter that needed to be cleared up urgently one way or another without waiting for the new Constitution which could take up to another year or more. The 20th Amendment sought to clear this up by reinstating the old Article 44(2). The restoration of the President’s power to hold portfolios was passed without any controversy or anybody seeming even to notice it. In the past, reducing the powers of the Presidency was the pivot around which the entire constitutional reform exercise revolved. The attempt to block the President from holding ministerial portfolios was a measure taken to reduce the power of the presidency introduced by the 19th Amendment. The absurdity of designating the President as the head of State, head of the government, head of the Executive, head of the Cabinet and then trying to prohibit the holder of that office from holding a ministerial portfolio was lost on the drafters of the 19th Amendment. Now this inconsistency too has been put right by the 20th Amendment. Thus the two most urgent provisions in the 20th Amendment have been passed with little or no controversy or even discussion. The former yahapalana hegemons who are now in the opposition in fact did not really defend the specific provisions of the 19th Amendment. They only expressed opposition to the 20th Amendment as a whole.

The vital elements in Article 70(1)

Another important issue that needed to be corrected even though it was not perhaps as urgent as the previously mentioned issues was the prohibition brought by the 19th Amendment on the dissolution of Parliament before the lapse of four and half years from the date of its first meeting, unless Parliament passes a resolution requesting dissolution with a two thirds majority. The rectification of this issue was not considered to be as urgent as the two issues mentioned earlier only because the present government has an overwhelming majority in Parliament. Had a government with only a slim majority in Parliament been in power, this issue would have been right at the top of the priority list. When the 19th Amendment repealed and replaced old article 70(1), the provisions that existed from the inception of the 1978 Constitution providing for the dissolution of Parliament in the event of the defeat of the government at a vote on the budget, or the statement of government policy or a no-confidence motion, were also dropped.

The Supreme Court quoting a previous SC determination stated that if this period during which the President is barred from dissolving Parliament is too long, it may be contended that the President’s power of dissolution which operates as a check to sustain the balance of power is denuded of its efficacy. But, if we strike middle ground, the balance of power itself being the overall objective, and decide on a period of two years and six months, that sufficiently addresses concerns with regard to this provision and it could be passed with only a two thirds majority in Parliament and will not require a referendum. Now after the 20th Amendment, the President can dissolve Parliament after two and a half years instead of the one year period in the old article 70(1) which existed before the 19th Amendment. This however was not the issue with regard to the post 19th Amendment Article 70(1). It would not have mattered even if the period during which the President could not dissolve Parliament was retained at four and a half years if the President’s power to dissolve Parliament in the event the parliamentary government loses a budget, a vote of no confidence, or a statement of government policy was restored. The 20th Amendment has restored the President’s ability to dissolve parliament if the Parliamentary government is showing signs of collapse by being unable to get a budget passed or to survive a no confidence motion etc. and that’s what really matters.

SC on the provisions that raised controversy

The provisions relating to Urgent Bills which were to be reintroduced into the Constitution by the 20th Amendment raised some controversy. When the Cabinet is of the view that a particular Bill is urgent in the national interest and makes an endorsement to that effect, the President shall require the special determination of the Supreme Court on the

consistency or inconsistency of any provisions of the Bill by a reference addressed to the Chief Justice. The Supreme Court should make its determination in twenty-four hours or such longer period not exceeding three days as the President may specify. Petitioners against the 20th Amendment contended that this provision impacts on the People’s judicial power as well as legislative power and that the restrictive time period set out not only hinders but also unfairly curtails the exercise of judicial power. Furthermore they claimed that giving the Executive discretion in deciding the time period within which the determination should be made encroaches into the judicial power of the Courts.

Therefore, empowering the Executive to set a time period within which a Court should provide its determination per se does not infringe on the Sovereignty of the People. The SC further observed that the relevant provision does not exclude or prohibit an interested party intervening in proceedings relating to a hearing on such Bill. Furthermore the provision concerned makes it mandatory that such Bill be submitted to judicial review through the prescribed process. Therefore the provisions relating to urgent Bills in the 20th Amendment does not require a referendum and can be passed with a two thirds majority in Parliament.

When it came to Dual Citizenship, Petitioners against the 20th Amendment contended that the removal of this disqualification infringes Articles 1 and 3 of the Constitution. They contended that persons who hold a dual citizenship have split loyalties. When they pledge allegiance to two sovereign nations, their capacity to take decisions with the sole idea of protecting and preserving the Sovereignty of one country would be compromised; specially, in situations of conflict of interests between the two countries. Such situations can always arise in many areas of concern including, commerce, trade, defence and in addition on bi-lateral and multi-lateral relations when both countries become relevant parties.

The Attorney-General’s contention was that even a dual citizen has the right to be treated equally and enjoys all the rights of a person who is a citizen of Sri Lanka, only. He further stated that Article 26(2) and (3) of the Constitution prohibit making any distinction on the manner on which citizenship was acquired, Citizens by descent and citizens by registration will have same rights. It was further contended that under the provisions of the Citizenship Act it is only a person who had had been a citizen of Sri Lanka who could gain the dual citizenship. The AG argued that the Petitioners’ claim of “split loyalties” and “conflicts of interests” are mere surmise and conjecture. The SC was of the view that a decision on the inconsistency or consistency with a Constitutional provision cannot be based on surmise and conjecture and further that in the exercise of jurisdiction in relation to an amendment to the Constitution, does not extend to consideration of the desirability of a provision or to delve into policy matters. The SC’s sole consideration would be the constitutionality of the provision.