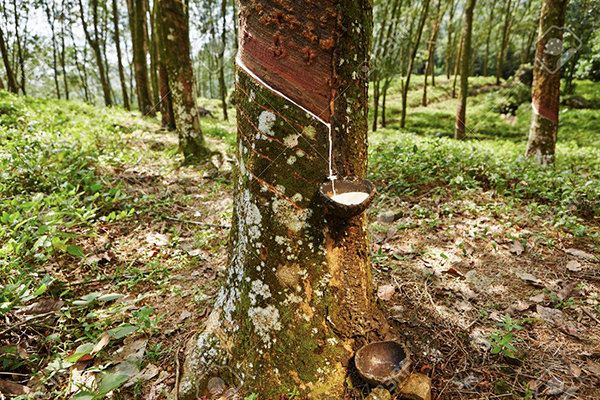 Rubber plantation was established in Sri Lanka over the past nearly 10 decades for extracting latex for the manufacture of raw rubber grades namely Ribbed Smoked Sheets (RSS), latex crepe, technically specified rubber (TSR), the starting materials for the manufacture of moulded products such as tyres. Rubber latex in concentrated form is used to manufacture foam rubber and dipped products like household and medical gloves, condoms and balloons. With the spread of diseases such as AIDS, the demand for the natural rubber based medical gloves and condoms started rising rapidly in the mid-1980s.

Due to COVID-19, which is fast spreading all over the world, the demand for medical gloves used for examining patients and household gloves used in supermarkets, etc., is growing at an unexpected high rate, thereby increasing the demand for concentrated rubber latex. This trend is expected to rise further at least for the next two to three years until an effective vaccine is found for COVID-19; the developed nations like Japan, the US and some European countries have already decided to live with the Covid-19 next couple of years until an effective vaccine is developed. Hence if the rubber plantations in the country start following proven agro-management practices introduced by the RRI, without engaging in extracting latex over in excess of what is biologically available trees by using harmful extraction techniques such as stimulation, they will be able to reap benefits of this rising demand for latex. However, if trees are exploited above 100% efficiency level, the way some of the plantations are doing today, the day the rubber industry disappears from this country is not far off.

The main reason for some of the rubber estates finding it difficult to remain viable today is due to the drop in productivity in kg/ha/yr by over 50% during the last half decade to about 770 Kg/ha/yr, and it is declining further due to the adoption of incorrect agro management techniques totally rejected by the RRI. The countrywide productivity in 2013 was over 1,200 Kg/ha/yr and in 2018 it has dropped down to 774 kg/ha/yr purely due to bad management; this is not due to infertility of the soil or due to poor weather conditions.

It should be mentioned here with appreciation that some rubber plantation companies earn high profits purely as they followthe RRI recommended agro-management practices. They have also been able to show that the rain guards introduced by the RRI to minimise crop loss caused by rain interference on tapping have helped record an annual crop increase of over 30%. Now they are engaged in low frequency d4 or d5 tapping trials on their own, thereby vastly reducing the tapper shortage in their estates.

Harvesting of latex from the rubber tree is done by tapping the bark using tapping intensities recommended by the RRI. The S2d2 tapping system adopted in most part of the island is called the tapping system of 100% efficiency. This 100% efficient tapping technique is capable of giving biologically possible highest yield from a rubber tree over a period of over 24years. If attempts are made to over-extract latex over and above this recommendation, with the help of rash techniques tapping, panels dry up (TPD) thereby making the tree worthless. Further, due to the high intensity tapping the productive period of the tree too is reduced. Hence, in order to obtain satisfactory returns on the investment it is essential to adopt the RRI-approved techniques.

But, it is very sad to note that in most of the RPCC-managed estates, unwarranted bad extraction techniques to extract more latex from the trees (far above what is biologically possible to extract) is practiced and hence today in most of the estates the percentage of Tapping Panel Dried trees (TPD) present is over 50%. If proper agro practices are followed, this percentage should be below10%. In other words, more than half the healthy trees in such estates are without a bark to yield even a drop of latex. Virtually they are like culled cows in a dairy farm. Unfortunately, when you travel on the Colombo Ratnapura road or on the Colombo Matara highway, right along the road you see rubber estates with healthy trees with a big canopy. But, how many of you are aware that most of them are useless trees not yielding any latex due to the above reason.

There has been a proposal of growing other crops on rubber estates. Then what will happen to the rubber products industry earning over US $ 1.25 Bn annually? If such estates are used for other crops which demand more inputs and better care are also subjected to poor agro-management, can they earn profits? Then, what will be the damage caused to the environment?

If the RPCC-managed estates are economically unviable, it means they have not been properly managed; important inputs like fertilizer have been curtailed and exploitation has been intensified by totally ignoring the recommendations of the RRI to achieve short term high yields, thereby lowering productivity to unexpectedly low uneconomical levels. They have been trapped in a vicious circle. Therefore, action must be taken as early as possible to prevent the rubber industry from disappearing from our soil. If not, over 250,000 unskilled workers engaged in estates and over40 to 50,000 semi-skilled and skilled workers employed in the rubber products industry will have to find employment elsewhere.

Another factor that has contributed to this situation is the communication gap between the RRI scientists and the RPCC-managed plantation. The valuable rubber bulletin published twice a year compiling all research findings of scientists and economic analysis of the industry done by reputed economists both local and overseas has not been published since mid-2018. Regional meetings conducted to discuss new developments in the industry and on the plantation and the problems faced by the estate managers in their management activities have not been conducted for years after setting up of the plantation rehabilitation and monitoring committee by the Ministry of Plantation Industries. As a result, not only the RPCC but also the Rubber Development Department officers have been doing things the way they want without heeding the RRI recommendations. Scientific committee meetings conducted by the RRI for planters and the RDD officers have not been held for a long time. A case in point is the present clone balance of rubber planted in the country. Without heeding the pressing need to maintain a uniform plantation of five top quality group 1 clones namely RRIC 100, 102, 121 and Pb 216 and 28/59 covering 20% of the total extent from each, replanting has been done with whatever the clone that is easy to access in their nurseries. This recommendation was made by all the IRRDB member countries in 1986 to avoid mass destruction of the entire rubber plantation or a very high percentage of the total rubber extent in the country in case of a disease pandemic effecting one of the clones starts to spread in the plantation like what happened in mid-1980s to the clone RRIC 103.

A policy decision was taken by the MPI in 1995 to eliminate the low yielding clone Pb 86 from the plantation by destroying even the bud wood nurseries controlled by the RDD and RPCC. According to statistics published following a countrywide survey carried out by the RRI in 2012, even 15 years after banning the propagation of Pb 86 clone, there is still 29% Pb 86 on plantations. This means neither the RPCC nor the RDD has followed the ruling given by the MPI to eliminate this low yielder from the plantation. This factor also has contributed to the declining yield of the rubber plantation in the country. Further, the RRIC 121 population has reached 33% of the total extent, which is slightly more than the recommended norm. Hence, a decision has been taken by the MPI on the advice of the RRI to reintroduce RRIC 100 clone to the plantation and also to discourage planting 121 for some time.

Therefore, if the new government is to develop the rubber industry, it must first ensure a close interaction among the RRI and the RPCC, the RDD regional offices and resume inspections by the RRI officers in RPCC estates without further delay to identify the wrong procedures followed by them and advise them to adopt remedial measures. RRI must take immediate action to publish its bulletin regularly as in the past to educate farmers on new research developments. One must keep in mind that the damage done by the RPCC by following unacceptable exploitation techniques to draw latex from the trees far above what is biologically available, must be stopped immediately for the sustainability of this valuable industry highly beneficial to the economy of Sri Lanka and also equally to the environment of the country.