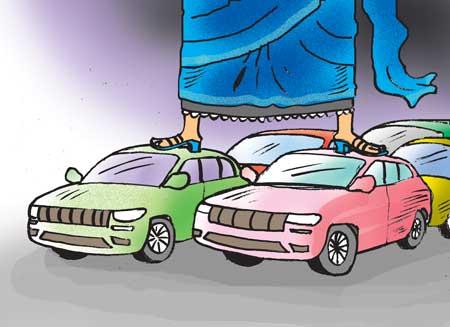 Whenever a new government takes office, some political and white-collar high-ups would develop a craze for new luxury vehicles.

Some political high-ups, in particular, are not content with one super luxury vehicle but want a fleet of such vehicles.

What is intriguing is that some senior purohitas are having six to seven luxury vehicles at their disposal when some of their colleagues have to manage with one ordinary vehicle, they say.

These senior purohitas are not prepared to release at least one vehicle from their fleet for the use of another colleague having no proper vehicle.

These senior purohitas hogging six to seven luxury vehicles are incidentally pillars of the regime who once had been vociferous about justice and fair play. “How can we forge ahead as a nation with this kind of people who are not prepared to follow the example in simplicity and frugality set by the Big Boss,” ask some concerned government stalwarts.