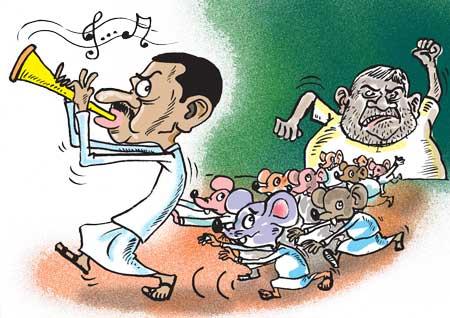 A row between a top team member and a purohita at state level has split the government supporters in Siyane Korale into two rival groups, they say.

This row is traced back to pre-election days when the top team member then a heavyweight in the district had unfairly treated the state purohita and his supporters.

In fact, the ‘new wattle and daub hut’ has become the refuge of all-party supporters who had got a raw deal from the top team member. The state purohita always steps out of the ‘hut’ with his following opposed to the heavyweight in the district.

The state purohita who is now armed with powers and authority which he could use to carry out a good measure of development work in the district appears to be keen on asserting himself, they say.

Some fear that this ongoing cold war between the two could culminate in a very unpleasant situation for all concerned.