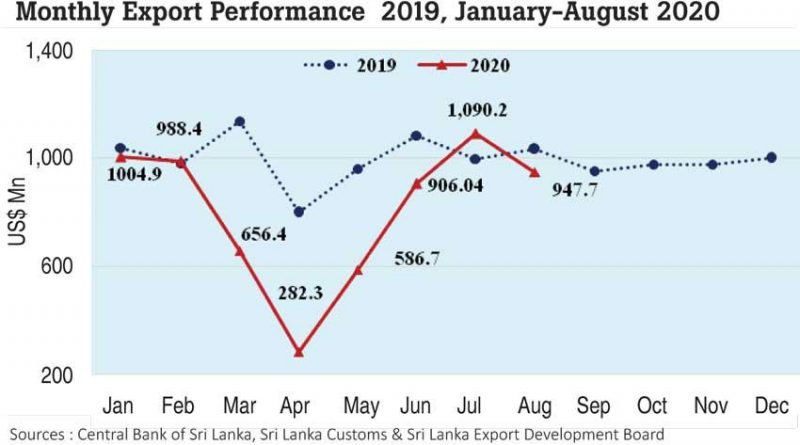 Sri Lanka’s exporters appear to be chugging along vigorously in their respective fields since the coronavirus related restrictions eased, as they generated nearly a billion dollars in earnings in August, the third such consecutive month, despite some key segments such as textiles & garments were seen losing some momentum.

Sri Lanka earned US$ 947. 68 million from exports of goods during August, after generating US$ 894 million in June and US$ 1, 090 million in July as merchandise exports made gains since May, the data collected from Sri Lanka Customs and compiled by the Export Development Board (EDB) showed.

The August exports however declined 13 percent from July and are still down 9 percent from the same month in 2019.

However, the EDB said earnings from made-up textiles increased two-fold in August from the comparable month in 2019.

Sri Lanka’s garment exports made a quick recovery in the immediate aftermath of the virus related restrictions as orders for personal protective equipment (PPE) increased from their regular customers in the United States and the Europe, largely offsetting the loss of business initially.

Even the textiles manufacturers switched their production to produce PPE as the US and the Europe are still battling the virus.

The United States is the largest customer of Sri Lankan-made goods, making up for a quarter of the total merchandise exports, while United Kingdom, India, Germany and Italy accounted for half of the exports.

During the first eight months, Sri Lanka exported US$ 6.4 billion worth goods, down 19.2 percent from the comparable period last year.

The EDB pins hope on a Sri Lanka-China preferential trade pact to minimise the country’s over-reliance on traditional US and European markets.

“Whilst appreciating that the US and the EU are the largest markets, we need to now create a significant export market in Asia including China. The China FTA will certainly help in this regard. Export product diversification must simultaneously happen so that we can create more billion-dollar industries for Sri Lanka,” EDB Chairman Prabhash Subasinghe said.

Meanwhile, the earnings from services exports such as Information Technology, business process management, construction, financial services and transport & logistics were estimated at US$ 2.2 billion for the first eight months of the year, down from US$ 2.6 billion a year ago.