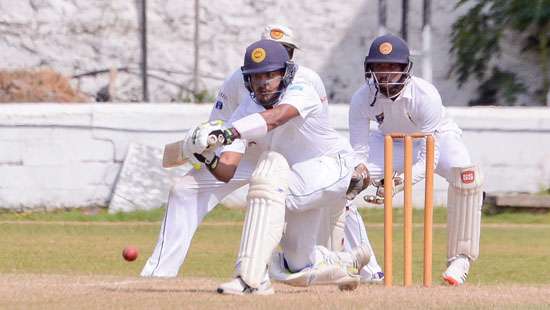 A quick-fire 107 in 111 balls inclusive of nine boundaries and four sixes by Skipper Angelo Perera helped NCC reach a formidable 487 in their first innings on the opening day of their SLC Premier Tier ‘A’ Super Eight Inter-Club Cricket Tournament encounter against Colts CC which began at the CCC Grounds in Maitland Crescent on Tuesday (25).

Angelo was involved in two fruitful partnerships after the NCC openers, Lahiru Udara and Niroshan Dickwella had added 102.

Angelo added 82 for the fourth wicket with Chathuranga de Silva put on 69 for the fifth wicket with Sahan Arachchige. Kamil Mishara had a dream debut for NCC when he made an unbeaten 72.

Meanwhile, Chilaw Marians CC ended day one at 83 for two in reply to CCC’s first innings score of 287 in their match played at the SSC Grounds in Maitland Place.

The highlight of the match was a five-wicket haul by Chilaw Marians CC spinner Nimesh Vimukthi.

Udara Jayasundara and Lahiru Thirimanne slammed centuries and figured in a massive 305-run stand for the second wicket as Ragama CC ended day one at 309 for two in their match against BRC at the P. Sara Oval in Colombo.

Dinesh Chandimal’s century helped Army SC end the first day’s play with a score of 344 for five in their match against Saracens SC played at the FTZ Grounds in Katunayake.