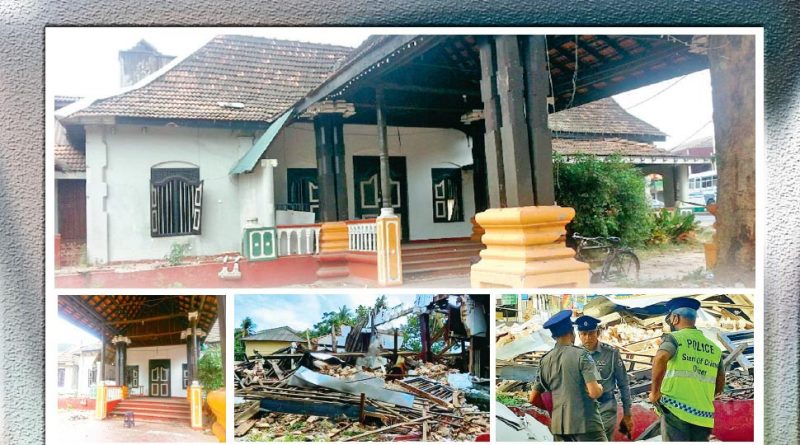 The demolition of an archaeological site in Kurunegala, commonly known as the ‘Buwaneka Hotel’, triggered controversy in the past few weeks.

Following the incident, many demanded that legal action be taken against those allegedly responsible including the Kurunegala Mayor, while some voiced their concerns over the archaeological value of the said establishment. Even though measures are being taken to renovate the said building and legal action has been filed according to the recommendations presented by a committee appointed to look into the incident, events surrounding this incident raise a question as to how an archaeological site can be destroyed this easily.

Former Director General of Road Development Authority (RDA) Kamal Amaraweera stressed that the main reason for the damage caused to archaeological sites and antiquities is because the Department of Archaeology do not have the proper documentation to the sites and have no adequate knowledge where historically valuable monuments are located.

It was also disclosed that Archaeology officers lack information and knowledge about the archaeological sites that should be conserved before RDA are sent to excavate an area. He noted that the RDA had to address several issues when they discover an artefact in the middle of a huge construction project.

“If we find something that has archaeological value during a construction, we will inform the provincial head regarding what we discovered. And then the officer will come with some other officials and will find way to conserve the area,” he noted while emphasising that construction activities can significantly impact the condition of buried archaeological remains and their evidence.

Henceforth, it is clear that alternative methods should be sought where archaeological conservation of a site is required but Amaraweera noted that no scientifically collected data exists with the Archaeological Department to evaluate hypothetical or anecdotal concerns over particular construction techniques that produce a high degree of damage.

Speaking about the potential physical, hydrological and geochemical changes associated with modern construction methods that can impact deleteriously upon archaeological sites and artefacts, Incumbent Director General of RDA, D.M. Dayarathna expressed as the responsible body for road development and management, the RDA said they will have to continue with the digging and other edifices as planned but cannot take the blame in full.

When asked what the proper procedure that the RDA takes prior to a construction, Dayarathna said initially that they obtain a site report of the places that the construction is taking place before starting the procedure.

“We start over to map our plan for the construction after the approval and then suddenly discover some archaeologically valued monument or site, which had been originally cleared as an archaeological free area,” he said.  A top official at the Archaeology Department Police Division said that they have recognised that artefacts are steadily being destroyed by a number of constructions, as well as human interference through many high prioritised projects like urban development and highway construction.

However, according to him this has been major issue for a long time but has doubled in recent years with the demolition of historical monuments are on the rise just because of the lack of communication between the two authorities. He added that each and every historically important building, construction or a location are vulnerable and are often at risk of social, legal, sometimes political forces that can alter the long-term stability, viability and even the protection of cultural properties.

“The issue is that groups and authorities who are really aware about the value of these monuments and buildings are unaware of the unintentional destruction of archaeological sites. Due to the challenges in developing areas, hundreds of heritage sites of equal or even greater significance to human civilisation languish due to neglect, poor management, can lead to deliberate destruction,” he said.

Meanwhile, Dayarathna said that they always conduct a survey and get a report with the approval of the Archaeology Department Head and only then will they start the planning a highway or road. “But when construction starts after planning, RDA engineers find some archaeological monuments in a site that had been cleared by the Archaeology Department.

If it is a movable monument, which represents an important era in history or symbolises a nation’s power, we will definitely inform the Police about it. But most of our Engineers are not archaeology experts and they are here to work according to a schedule. So, they won’t think twice before digging,” he explained on why the RDA cannot take the blame for damage that had taken place during road development projects.

While insisting that urban heritage issues engage not only heritage managers and archaeologists but also geographers, landscape and urban planners, engineers, architects, anthropologists, and historians, among others, Amaraweera claimed that as cultural heritage issues in general, those concerning the urban heritage are interdisciplinary and multifaceted. “The urban heritage often has a position ‘in between.’ On one hand, it is constantly changing and under the threat of being destroyed due to the nature of urban development, and on the other hand, it is protected and conserved because of its historical value,” he noted.

Justifying the statement made by the official at Archaeological Police, Dayarathna pointed out that the department responsible with collecting and keeping records of archaeological sites, lacks correspondence with other authorities and are finding difficulties in keeping and tracking their own data, leading to many problems which still remain unanswered.

However, according to the Police officer, the Department have come across many incidents where some archaeological monuments have been destroyed although they had received the complaint from the RDA. He noted that they were technically late when the complaints are received and that they also cannot take any actions against the RDA since they are already working on a plan approved by the Department.

While insisting that intense urban development without consideration of archaeological and cultural heritage preservation can result in instances of Urbicide, Police officer said that Politicians and other officers with personal agendas can take unwanted advantages out of these situations by creating unwarranted conflicts among political parties, authorities that can end in ethnic strife.

Speaking about ethnic friction, Archaeology Department Director General, Prof. Senarath Dissanayake opined that it is necessary first of all to understand the cultural heritage that determined the damage and to question what led to its destruction and to appreciate the impact of conflict on society. He rationalised the statement made by Dayarathna regarding the sudden appearance of archaeological sites at the project site and said that it is clear that the Department did not have proper data and that providing a survey report saying the site is free from artefacts can be erroneous.

“I have even submitted a proposal to both the President Gotabaya Rajapaksa and the Prime Minister Mahinda Rajapaksa, urging them to hand over areas coming under the Department of Archaeology where no archaeological findings were made, to the Buddhist clergy. Surveys and excavations carried out by the officers attached to my Department had found that no archaeological items had been detected in 75 per cent of the areas coming under the Department,” he said.

However, the RDA head was not ready to take the blame for the damages but said that each and every construction carried by the RDA commences after the approval of Archaeological Department certifying the area is clear of historic artefacts and that its suitable for construction. Also, the Archaeological Department is of the view that mistakes can happen since they do not have proper records of their own preserved and non-preserved sites while accepting that there are many historically valuable areas vulnerable to damage.

The Police officer also stressed that archaeologists face a difficult challenge in trying to create balance between continuity and change in the modern world while engineers find it difficult to build without knowing the historical value of a site.

Nevertheless, commenting on the recent incident in Kurunegala where the ancient palace of king was bulldozed, Prof. Dissanayaka said that the main cause is the lack of measures in place to protect historic and cultural resources. Corruption and misplaced nationalism have led to an almost complete eradication of the old palace, which dates back to the 13th and 14th centuries.

“Even though there are solid reasons and evidence to take action against the wrongdoers, no one is concentrating on legal actions that should be taken but everyone is concentrating on taking unwanted advantages of the situation to garner votes. But we are looking at what has actually happened and have limited power here at the Archaeological Department,” he lamented.

When asked where the most vulnerable area for historical monuments is, the Police officer said that it is Anuradhapura where looting of artefacts have increased recently. He said that looters do not stop since the Archaeological Act is not powerful enough to frame a wrongdoer. “There is huge need of introducing a new Act to protect historical sites and monuments while punishing offenders with significant penalties,” he said.

The RDA says that with a better coordination, greater State non-state involvement and use of innovative technology and new solutions can reverse the destruction and create sustainable preservation success stories in hundreds of at-risk heritage sites.

The Department of Archaeology, as Sri Lanka’s primary State institution entrusted with the task of preserving and raising awareness on archaeological sites, has done a great deal of admirable work to protect artefacts for the generations to come. However, its activities and knowledge not being disclosed to officials attached to other State institutions is seen by many as the underlying cause for the aforesaid destruction of the Kurunegala archaeological site. Sharing of information between State institutions can avert such incidents and also expedite development.