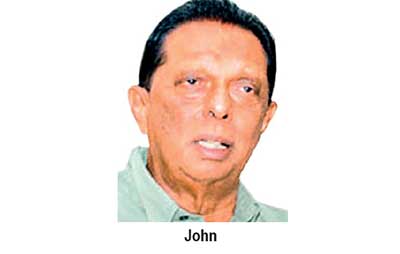 The UNP was a national party with sound policies and through the historic 19th Amendment to the Constitution strengthened democracy in the country, but was defeated in last week’s General Election, mainly because it had shun propogating racism as a means of capturing power, says senior UNPer and former Minister John Amaratunga.

Asked to analyse the UNP’s shocking electoral performance, Amaratunga said that the UNP did not deserve to be defeated in such a manner, considering the extent of work it had done whilst in government between 2015 and March this year, despite droughts, floods and the negative impact on the economy resulting from the April 2019 Easter Sunday suicide bomb explosions by the National Thowheed Jamaat, which had publicly enunciated its policies since 2005.

“Those who defected from the United National Party (UNP) to contest on the Samagi Jana Balawegaya (SJB) ticket, benefitted from the work, we as a UNP government led by Ranil Wickremesinghe did between 2015 and 2019, but the current  UNP leadership  was left with unfairly taking the blame for not preventing the Easter explosions, when the person who had the power to stop it, slept on the intelligence warnings received well in advance “, he noted, pointing out that the people had been provided substantial relief and public servants given a Rs.10,000 salary increase, despite having to repay the massive high interest commercial dollar loans that President Mahinda Rajapaksa had obtained between 2010 and 2014 – the majority of which were pumped into ego boosting projects that had turned out to be white elephants.

Amaratunga said that the UNP was a party that represented all races in the country and was identified with the birth of an Independent Sri Lanka. Such a grouping he stressed “cannot and will not unashamedly resort to racism to capture power”.

Asked about reports that among the 744,373 spoilt ballots at the General Election, was a sizeable number of UNP votes, due to UNPers being disappointed with the split in the party and not wanting to support either faction as a mark of protest, the seasoned politician said “Yes, that’s possible.”

Asked if the UNP would now opt for a new leader, Amaratunga said that Ranil Wickremesinghe was not keen on hanging on, but to desert the party at the present juncture would also not be advisable. “The future lies with the youth. So, the process of grooming them has to begin now. For that, the seniors  have to remain at least in the short term “, he explained stressing that the UNP and the ” Elephant”, which rose majestically after the 1970 debacle to capture a five-sixth majority, would once again re-emerge as a strong force – as certain as the rising Sun in this transient world of politics.

Ameratunga hoped that the UNP and SJB would leave their insignificant differences aside and unite because their policies were similar and most importantly neither propagated racism as a means of capturing power.

Analysing the SJB’s electoral performance, he said it was cock-a-hoop, but in reality had helped the Podujana Peramuna obtain a two-thirds majority, which could have been prevented, if the SJB headed by Sajith Premadasa, had contested as a UNP-led alliance.

The veteran UNPer pointed out that the party winning the Presidential Election, had always gone on to win the Parliamentary polls that followed. “Sajith knew he cannot become the Prime Minister this time. So the next best thing he should have done was to ensure that the Rajapaksas did not get a majority that would enable them to reverse all the democratic gains achieved through the 19th Amendment to the Constitution. The SJB was meant to be a UNP – led alliance with Sajith as its Prime Ministerial candidate, but he made it his alliance and in the process divided the UNP.”

It was evident at the general election that political parties based on policies were overtaken by political movements, Amaratunga noted, warning that it could lead to an unstable political situation in the years to come.