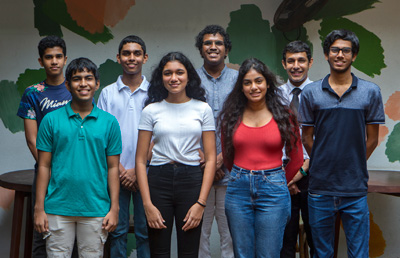 10 p.m, Wednesday, July 29, 2020: An unlikely hour to be making history- but for eight people who had been orchestrating this moment for nine long months- a great triumph- and for Sri Lanka a chance to reach new heights on the world stage. The news from Mexico was that the Sri Lankan team had made it to the finals of the World Schools Debating Championships (WSDC) – by beating Ireland at the semi-finals just an hour earlier.

In all previous years of this epic championship which is the veritable Olympics of school debating- the highest Sri Lanka had come up to were the octo finals- the stage before the quarter finals when there are 16 teams in the fray. Making it to the final this year is thus, a feat to marvel about.

But then the current team is of quite rare mettle. Just a little over a month ago they brought home the Tilbury House Championship trophy. Headed by captain Shalem Sumanthiran (Royal College), the team comprises Janul de Silva (also from Royal), Chanidu Ratnayake (Ananda College), Jasmine Markandu and Rahul de Silva (both from Colombo International School) with Reiha Wimalasekere (Ladies’ College) as reserve.

Head coach Kithmina Hewage who works as a research economist at the Institute of Policy Studies says that Sri Lanka has been participating in the world championships since 2006. This year’s team he says was marked for “its mentality- they were brilliantly focused”. He is proud to have mentored a team that will greatly inspire many generations of young debaters to come.

Kithmina along with technical coach Sanjit Dias began training the team in November 2019. They were not to know- then- that the championships would be held online. The training was rigorous. Apart from practice debates, they read The Economist, the New York Times, watched Al Jazeera for in-depth analyses and listened to podcasts. Research had to be of the highest standard.

All debating this year at the WSDC happened online. Of the six preliminary rounds, Sri Lanka won four- losing only to China and Bangladesh.

After completing the preliminary rounds, 24 teams entered the knockouts. In the double octo finals, Sri Lanka routed Scotland to make it to the octo finals- with 16 teams competing- where they faced England. After beating England, they were up against Hong Kong in the quarter finals.

All these teams, says Shalem, were stalwarts- traditionally big guys on the field. Facing Hong Kong, the motion they debated was that ‘This House would not distribute emergency and humanitarian aid through non-state groups linked to terrorism”. Sri Lanka had to oppose the motion and won with a split decision in their favour.

The next hurdle was the semi-finals with Ireland where the motion was: “This House believes that states should reclaim a large proportion of all donations to charities and redistribute it across charities on the basis of their effectiveness”. Again they were opposing but won with all seven judges unanimous in their decision.

It took a lot of grit to battle their more fancied opponents, Shalem admits, and to be one of the two to head for the final out of 68 countries may seem a bit surreal.

The judges, commenting on Sri Lanka’s performance, paid them a tribute for “not only making the right arguments- but also focusing on the issues that are most important”.

“They complimented our team on good strategy,” says Sanjit Dias.

The debaters take on Canada in the finals- to be held today (Sunday, August 2) around 6.45 p.m. local time. Tackling a one-time champion will be a challenge but they will have Kithmina’s gentle mantra to draw strength and inspiration from:“It is not the result- but the performance- as long as we perform to our full potential”.

While keeping our fingers crossed and sending them our heartiest wishes for success, we too won’t forget that they have already done Sri Lanka proud and taken schools debating to great heights.