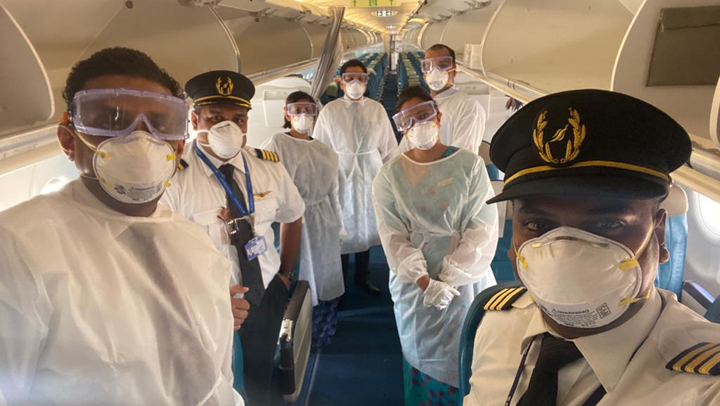 CONOMYNEXT – Sri Lanka will fly home some 600 migrant workers from Abu Dhabi and Dubai on July 31 and August 1, but begin full repatriation flights after the elections on August 9, senior officials said.

They told EconomyNext that flights from other countries are also scheduled.

Repatriation flights from the Middle East, in particular, were stopped after the breakout of COVID 19 at the Kandakadu Rehabilitation centre in Polonnaruwa in early July.

With the Kandakadu cluster under control, the National Centre for the Prevention of COVID 19 said it can resume the flights.

A significant number of returning migrant workers from the Middle East and Europe have been found have been COVID 19 positive.

Earlier the government announced that repatriations will resume only in September.

However, after a high-profile incident earlier this week where Jordanian police fired tear gas at women Sri Lankan migrant workers who allegedly were holding three Embassy staffers against their will the government seems to have had a change of heart.

Additional Secretary to the President for Foreign Relations, Admiral Jayantha Colombage as saying that almost 6,000 to 8,000 people are waiting to be immediately repatriated as they have lost their jobs and accommodation.

“We will have a flight on the 31st and then another one on the first for the time being and we are making plans for the rest of the time,” Colombage said.

According to the Foreign Ministry, some 50,000 Lankans are stranded in several countries who are wanting to return.

Sri Lanka halted repatriation process on July 14 after a third COVID infection cluster was identified in a drug rehabilitation centre in Kandakadu, in the North Central Province.

The plight of stranded Sri Lankan migrant workers mostly maids and construction workers in the Middle East has become a major issue.

Activists working for migrant labour claimed at least a hundred Sri Lankan workers have died in various countries during the past three months.

Hemamali Abyerathna, from the group Free Women Organisation, says around half of them have succumbed to the COVID 19 virus as they are out of work and have no access to healthcare.

In a widely circulated Facebook video posted by Jatmburewela Chandrarathna Thero shows how the three staff members of the embassy were held hostage by the women migrant workers. The video showed the women trying to feed the hostages the food they have been eating for the past five months.