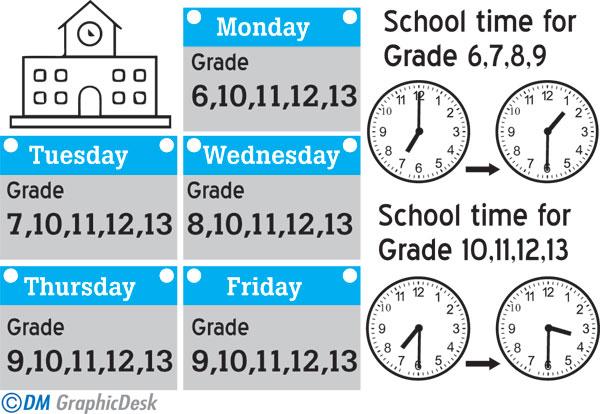 he Education Ministry had decided to restart all Government and Government approved private schools from August 10 under several stages following recommendations of the health officials.

While addressing a meeting, Education Minister Dullas Alahapperuma said only Grade 11, 12 and 13 were reopened from July 27. Only these students would be allowed to schools until Friday (31), he said.

Meanwhile, the Ministry also decided to close all schools for three days until August 7 as some schools are to be used as polling stations and counting centres while many teachers would also be engaged in election duties.

However, the Ministry had decided to restart all grades (Grade 1 to 13) from August 10 and advised to allow the students to return to classes based on its number.

Accordingly, if the student capacity is 200 or less in one grade, the classes can be conducted while maintaining the one-metre distance among students and those schools can start on August 10.

The primary schools (Grade one to 5) with the student capacity of 200 or less can continue their classes as usual.

Getting back of students for the secondary schools with students capacity more than 200 will be as follows.