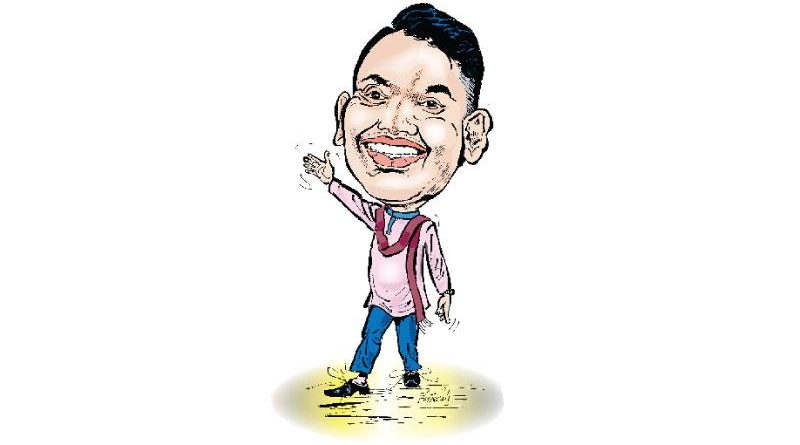 Parliamentarian Namal Rajapaksa, Attorney-at-Law in an  interview with the local media explained the Government’s stand on  various issues reiterating the efforts to contain the spread of the  coronavirus.

Q. How does the current situation affect your election campaign?

A. As we comply with the quarantine regulations  there are no big rallies but meeting small groups and conducting  house-to-house canvassing.

Q. The Corona pandemic is on the rise again. It appears  that the Government has ignored all these and concentrated on the  general election?

A. No, the Government has taken every action to  contain the spread of Coronavirus.

This pandemic will not cease shortly and  as such we have to live with it. We cannot, however, close mercantile  establishments and schools indefinitely but to act with caution in the  interest of the people. We stopped our political activities for three  days and resumed it subject to quarantine regulations.

Q. The Technical Committee was not convened for almost  one month until the Corona situation worsened. Even the GMOA complained.  So how do you say you did not give priority to the election campaign?

A. We took every possible action to contain the  spread of the corona virus pandemic. There was the danger of a ‘second wave’ in  the world, and opening of our airport posed a risk. So your allegation  is baseless.

The Ministry of Health took every effort during the past  few days to convene the Technical Committee. That is an open secret!

Q. What was the reason for not convening the Technical Committee so far?

A. The Committee is convened only once a month. It  is the responsibility of the Technical Committee to ensure that its  decisions are implemented. Certainly it will be convened if any other  issue arises.

Q.  As the coronavirus crisis was not fully contained should not have the Committee assembled?

A. No, It could have been convened but what is more  important is for the Committee decisions to be properly implemented  leaving no room for any subsequent action. There was no spread of the  pandemic until a case was reported from the Kandakadu camp.

Q. The ‘second wave’ is more dangerous. By now, the coronavirus has spread to several districts. How is it that this is not so grave?

A. My personal view is that this is not a ‘second  wave.’ I would say it is a ‘first wave plus’ which we need to  anticipate. We cannot keep schools closed eternally. Until a solution is  found for the pandemic we need to face the challenge. We should  minimise the spread of the coronavirus while ensuring the conduct of community  life as usual.

Q. Have we not failed to contain Corona, contrary to publicity that the Sri Lankan Government accomplished it?

A. No, relative to other countries I think we have  contained it. With globalisation a one hundred per cent success is not  realistic. We have no alternative, but to face the challenge as a  Government. Despite repeated warnings by the intelligence agencies, no  action had been taken to prevent the Easter Sunday terrorist attack  which killed about 300 innocent people.

Herethe difference is this  Government makes decisions and acts appropriate to the occasion. The  people have reposed trust in the Government as it braves every  challenge.

Q.Is it time to hold elections in a situation where  people are called upon to wear masks and follow health guidelines for  the safety of their lives. Do you think in this atmosphere voters will  volunteer to cast their votes?

A. I think people will definitely cast their votes  as they are convinced of the gravity of the coronavirus and the need to  be cautious in wearing masks, and adhering to social-distancing and so  on.

When the WHO says it would take another year or more to invent a  vaccine we have to live with the inevitable. I am sure our people have  faced graver challenges. It is wrong to assume that the people are  unaccustomed to queues and wearing masks.

Q. Some time ago you had said that you would not  hesitate even to coalesce with Rishad and Hakeem to form a Government.  Could you elaborate on it?

A. I deny it, I have never said so. I was the only  one who opposed any attempts to form a Government with Rishad and  Hakeem. Even today I hold the same view. What was in Facebook was false.

Q. Are you confident of a two-thirds majority this time?

Q. If you are so confident of a two-thirds majority why  did some former powerful minister of your Government openly say that you  would have to negotiate with the UNP for a two-thirds victory?

A. They are only political statements made in the  election campaign while the fact remains that it is the voters who elect  their representatives.

Q. Over 6.9 million people voted for you in the hope  that fraudsters and rogues would not be appointed to high posts, those  responsible for the Easter Sunday attack brought to book, crooks who  indulged in the Central Bank Bond scam would be dealt with by law,  nothing has materialised. In the circumstances, how could you say people  have reposed trust in you?

A. No. Those appointments were made by President  Gotabaya Rajapaksa via a Committee of Experts comprising top businessmen  as well. Complaints, if any, could be made to the Committee. As the  Yahapalana Government did, we are not ready to single out people and  imprison them on presumptions. Investigations on the Easter Sunday  terrorist attack and Central Bank Bond scam are being conducted in a  transparent manner.

Do not forget the fact that investigations are  conducted on a terrorist organisation.

Q. Why are the investigations on the Easter Sunday  attack dragging on? As the Cardinal had said it should have been  completed by now.

A. In a court inquiry, you cannot act on hypothetical grounds. You have to abide by the law.

Q. People pinned their hopes on the Rajapaksa Government  mainly in view of the Easter Sunday attack. Have not the Catholics lost  hope?

A. Not at all. People’s faith in the Government has  been further strengthened, especially in view of the way the  investigations are being conducted. We could have also taken into  custody a Minister or two. This won’t happen.

Q. Whatever you say, controversial issues such as the Bond scam and Easter Sunday attack are mere bogies during elections.

A. Have you ever heard either President Gotabaya  Rajapaksa or Prime Minister Mahinda Rajapaksa making such issues as  election pledges. We made our proposals only on the burning problems of  the masses. Investigations are being conducted in a very transparent  manner.

Q. There is the fact that some people in Hambantota do  not have even a toilet despite Rajapaksa’s ruling the country for ten  years. Will they not think that the Rajapaksas who did not provide even  the basic amenities will look after the country?

A. The people of Hambantota reposed implicit trust  in us for 100 years. The development heralded during the Mahinda  Rajapaksa political ascendency is unparalleled which no other political  leader ever attempted. During the past five years Sajith Premadasa  merely cleared the jungle and opened village schemes.   There are no roads, electricity or a single job provided in  the private sector or a school building they built in Hambantota during  the past five years. For all these, Sajith Premadasa is responsible.

Q. Rajapaksa family rule was the main topic during the  2010-2015 period. This time too, a good number of candidates from the  Rajapaksas is contesting. Is it not the same family rule that  perpetuates?

A. No, not at all! There are no newcomers but the  same old lot. Basil Rajapaksa is not contesting this time and as such you  cannot repeat the allegation, family rule. We have a party and we have  filed our nominations. The voters will do the needful. If the husband  and wife are included in the Cabinet, through the national list, then it  is really ‘family rule.’ We have not done so.

Q. You enlisted the support of the SLFP during the last  Presidential election. This time you are mercilessly pursuing them. Are  you trying to drop them?

A. No, we won’t sling mud at the SLFP but we are not happy with the conduct of certain people.

Q. During the coronavirus pandemic, you had designated  nursing staff as ‘Suwaviruwo.’ Today these Suwaviruwo are protesting on  the road as their allowances are not paid. Is this fair?

A. This was basically due to some problem in the  Provincial Councils. Financial Provision has to be found  after the General Election.