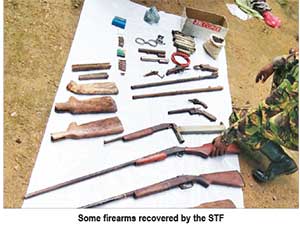 Raids conducted by the STF commandos, on Saturday and Sunday, helped net 10 underworld characters and a haul of firearms along with stocks of heroin.

The STF, on Saturday (25), raided an underworld weapons factory at Imbulana in Rathnagala, Ruwanwella and seized a haul of arms and ammunition.

A person suspected of operating the weapons factory was arrested by the STF.

The raiders recovered three 12-bore shotguns of foreign origin, two 12-bore locally manufactured guns, a galkatas, a T-katas, which can use T-56 ammunition, a pistol, a revolver, a cache of explosives and paraphernalia and tools used to manufacture firearms.

Police said that the weapons factory had been used to produce weapons for underworld gangs and repair them.

Investigations revealed the weapons factory had been in operation for a long time.

The suspect along with the firearms and explosives were handed over to police for further investigations.

The suspect is a 52-year-old resident of Ruwanwella.

During a separate raid at Meetiyagoda, STF commandos nabbed three underworld figures, including a close associate of Makandure Madhush with a firearm, ten bullets and 1.5 kilos of heroin. He is known as Meetiyagoda Podi Sudu.

During a raid conducted at Boralesgamuwa by another team of STF commandos, six heroin peddlers who distributed the banned substance in the Boralesgamuwa, Horana and Mirihana areas were nabbed.

The STF also caught two confederates of the underworld leader known as Welle Suranga at Mutwal with a stock of heroin.