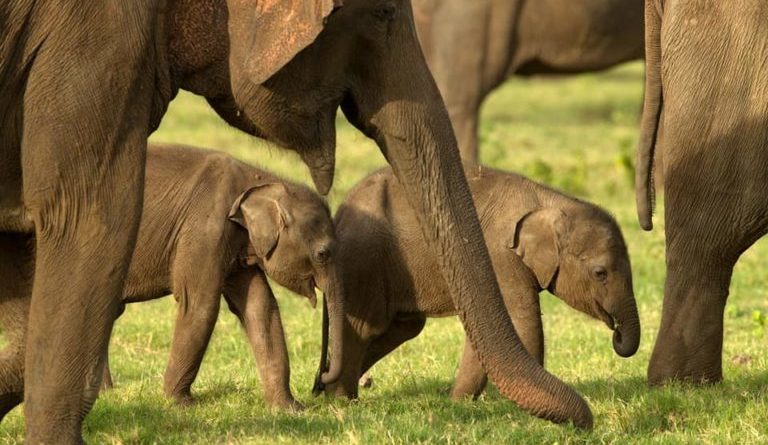 MINNERIYA NATIONAL PARK, Sri Lanka — Playful elephant calves in Sri Lanka’s Minneriya National Park are a common sight. But things were different for the two baby elephants noticed when the country’s national parks reopened in mid-June after the COVID-19 lockdown. The calves were the same size, always together and suckling milk from the same female at the same time.

These observations spurred the curiosity of elephant researcher Sumith Pilapitiya, who studies the social behavior of Asian elephants (Elephas maximus maximus) in Minnerya in collaboration with the Department of Wildlife Conservation (DWC).

Pilapitiya observed the calves and adult females in the herd for several days, which left him convinced that the look-a-like babies were indeed twins. “We first wanted to rule out the chances that this is actually ‘allomothering,’ where a female relative within the herd other than the biological mother [takes] care of an additional calf,” Pilapitiya told Mongabay.

But the calves only suckled from one adult female, with each calf nursing on opposite sides, Pilapitiya said, leading to the conclusion that this female was their biological mother.

In addition, the time the two calves spend with each other, and their behavior toward each other also helped him conclude that they are twins.

“The twins, a male and a female, appeared to be healthy and playful like any other elephant calf that age,” Pilapitiya said. “[These are] the first live twin elephants recorded from Sri Lanka, but there could have been other similar occurrences in the wild not noticed by us.”

Tharaka Prasad, the chief veterinary surgeon of the DWC, said the department would be carrying out a DNA test using elephant dung to confirm scientifically the calves are twins. In 2018, stillborn elephant twins were observed in eastern Sri Lanka’s Maduruoya National Park, Prasad said.

About 18 years ago, DWC discovered two orphaned calves close to the Sagam tank in eastern Sri Lanka that were around the same age as the Minneriya twins are now. “They were male and female and slightly smaller and possibly abandoned soon after their birth,” Suhada Jayawardana, a DWC veterinary surgeon, told Mongabay.

One of the male calf’s forelegs was larger than the other, and one of the female calf’s hind legs was slimmer than the other. “Such things can happen when the calves are pressed against each other inside the womb,” Jayawardana said. Both of these elephants were taken to the Elephant Transit Home, and after about five years of rehabilitation, they were released back into the wild.

“We tried to do a DNA test to verify whether they were twins, but the facility was not so easily accessible at that time, so there was no test done to confirm they were twins,” Jayawardana said.

Twins among their African cousins

While there are few records of twins among Asian elephants, several such documented cases exist among African elephants.

Researchers in Kenya’s Amboseli National Park have been continuously monitoring the park’s elephant population for nearly 50 years. Researchers there recorded the births of four sets of twins. “We observed our first set of twin elephants in 1980, and they both survived to adulthood,” Cynthia Moss, the director of Amboseli Trust for Elephants, said.

“Some 38 years passed without recording the birth of elephant twins, but then in between 2018 and 2020, on three occasions, twins were born,” Moss told Mongabay. “Two of the recorded instances occurred in February and April this year,” Moss said, adding that sometimes it is possible to observe aggressive competition for suckling among the elephant babies.

Moss also said that the existence of elephant twins has been recorded in Tanzania and Uganda as well, indicating that more such births, unknown to science, have likely occurred.

Minneriya National Park is known around the world as the location of the largest Asian elephant gathering with more than 300 elephants congregating in close proximity at the ancient, human-made Minneriya reservoir. It is commonly believed that elephants visit the tank for water, but researchers have discovered that the elephants come together to feed on fresh grass shoots that emerge as the tank’s water level recedes during the dry season. Elephants start arriving at the national park in July and typically stay through mid-October. The timing of the births of Minneriya jumbo twins offered the perfect kickoff for the 2020 gathering.

The event has been internationally recognized as one of the world’s greatest wildlife spectacles, and it’s a huge tourist attraction for the country that’s estimated to bring in more than 1.2 billion Sri Lankan rupees ($6.5 million). But recently, an irrigation project has impacted the gathering. The human-made tank at Minneriya has been renovated for use as a water source for irrigation. As part of the Moragahakanda-KaluGanga multi-purpose water project, water is released to the Minneriya reservoir for farming downstream, even during times of drought. But this new use of the reservoir has also altered the dynamics of the elephant gathering.

“The Irrigation Department agreed not to fill the reservoir above 70% of its capacity, but even this does not seem to be working in favor of the great gathering,” Pilapitiya, a former director general of the DWC, said.

Water is released from the Moragahakanda reservoir, which then flows into the Minneriya tank in July. According to Pilapitiya, in 2018, 2019, and 2020, large numbers of elephants left the area within seven to 10 days of the release of the water. “The moving away may be the direct result of the tank’s water levels,” he said.

“There will be elephants at the Minneriya National Park at any given time, but the ‘Great Gathering’ that reaches up to about 450 elephants during its peak in late August [and] September will only be a thing of the past,” Pilapitiya said.