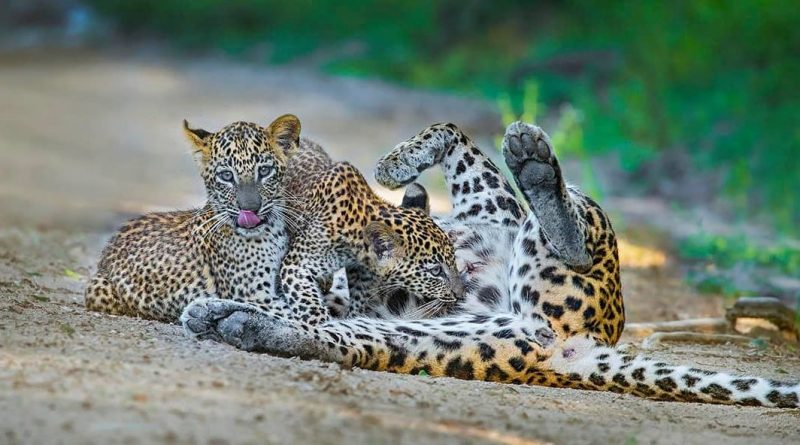 The Yala Leopard Center (YLC) contains information on 102 leopards documented through an identification initiative called the Yala Leopard Diary (YLD), started by wildlife enthusiast Milinda Wattegedara and his team in 2013 to collect data and photographic records of the leopards found in Yala Block-I. The park is divided into five sections, and Block-I, at 14,101 hectares (34,844 acres), is the most popular section for wildlife viewing.

“The kiosk at the YLC contains information of all the leopards recorded in the past seven years with identification features and home range details, enabling visitors to match descriptions with the leopards’ database,” said Mevan Piyasena, a naturalist and wildlife photographer, and one of the four people responsible for setting up the YLC.

Piyasena told Mongabay the idea to set up an information center to raise awareness and share knowledge about the leopards of Yala was borne out of a 2019 discussion among park officials and a group of wildlife enthusiasts. Piyasena, together with Wattegedara, Dushyantha Silva and Raveendra Siriwardena, pooled their resources and drew support from individuals and institutions to get the center up and running within a year.

The YLC is set up near the entrance to Yala National Park and housed in a building donated in memory of leopard researcher Ravi Samarasinghe, who did extensive studies on spot patterns of leopards for purposes of identification. Just like human fingerprints, leopards’ spot patterns can be used to identify each individual. Through the YLC, researchers hope to be able to keep tabs on which of the animals still frequents Block-I.

“Over 50% of these leopards [in the Yala Leopard Diary] have not been sighted for several years,” Wattegedara said. “We believe they died due to different reasons. According to our records, there are about 50-60 leopards in the core area of Yala Block-I.”

From Caesar to Satan

To identify each individual leopard, the leopard diary team assigns a unique code to each animal. This code starts with YM or YF (“Y” for Yala and “M” or “F” for male or female). The park’s dominant male is YM11, also known as Hitler because of how he’s expanded his dominance over the territory.

“For the ease of identification, we also give them nicknames,” Wattegedara said. Other leopards bear similarly hefty names from history: Caesar (YM40), Brutus (YM29), Alexander (YM28), and Cleo (YF42). Others have local names, such as YM7, a.k.a. Harak Hora, which means “cattle thief,” and YM2 or Pottaya (“blind”). There’s also a Satan (YM6), Strawberry (YF32), and Pink nose (YM9).

The Leopard Diary’s Facebook page has photographs of most of these big cats, with Wattegedara saying they want to share the information widely.

Most visitors to Yala spend their time taking photographs of the leopards and don’t take the time to just sit and observe their behavior. But frequent visitors have been rewarded with some unique insights into leopard life at Yala. One case involved Harak Hora, YM7, mating with his mother, Jeena (YF1) in 2017. YM7 was first sighted as a cub with his mother just three years earlier. Mating among family members isn’t uncommon among big cats. On another rare occasion, leopard watchers heard growls, normal during mating, but two hours of patient waiting surprised the onlookers when the couple emerging from the thickets were two adult females, Jennie (YF2) and Strawberry (YF32). The two females were seen together for another three days in the vicinity. “It was a rare occurrence and truly special,” Wattegedara said.

Other than elevating the visitor experience, the YLC and other initiatives at Yala also help monitor leopard populations and inform their management, said Sumith Pilapitiya, former director-general of the Department of Wildlife Conservation (DWC).

For example, many of Yala’s leopards roam outside the national park’s boundaries, exposing themselves to various threats. But the new records can help identify potential threats to the animals, Pilapitiya told Mongabay.

The Yala Leopard Diary identified an instance when Michelle (YF34), born in Yala, was seen 25 kilometers (15.5 miles) south in the Nimalawa Sanctuary, and less than 2 km (1 mi) from a densely populated human area. “Be this migration temporary or permanent, this kind of data helps to strengthen the conservation of buffer zones and other forested patches connecting national parks, Pilapitiya said.