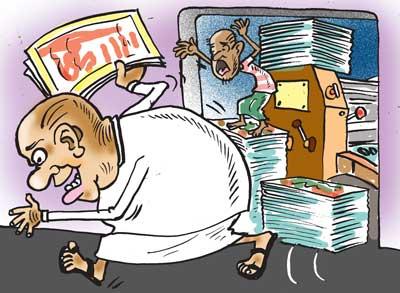 As soon as the date of the general poll was announced, some candidates had embarked on the propaganda campaign.

They had lost no time in placing orders with the printing presses for printing posters and cutouts carrying their mugshots and party symbols without their preference numbers.

They had planned to go ahead with the propaganda campaign with a poster blitz as usual even before the preference numbers being assigned to them.

And then came the election commission’s announcement like a thunderbolt tabooing the public display of posters and cutouts with the warning of dire consequences for the candidates violating the law. This warning was a blow that stunned the candidates who had already got thousands of posters printed which were lying in huge heaps in their homes and political offices.

Meanwhile, some press owners too have found themselves placed in an unenviable situation for some candidates who had placed orders for printing posters have stopped calling over to take delivery of the posters that they had ordered. The mountains of uncleared posters lying in their presses have become a veritable headache to the press owners, they say.