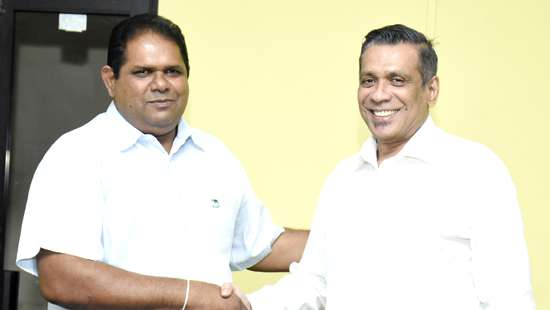 Incumbent President of Sri Lanka Rugby (SLR) Lasitha Gunaratne today (20) threw his support behind Rizly Illyas’ bid to head SLR when the election of office bearers is held next month.

Gunaratne claimed that he never intended to run for a second term in office if the position was to be contested against other candidates, clearing the air over a misunderstanding between him and Illyas when the latter launched his bid to become President of SLR.

“The original date for the AGM was May 30 and at the time I was given consent from our affiliates to come forward and complete a second term. Unfortunately, there was suddenly lockdown and for two, three months we were not in contact which ended up causing some miscommunication,” Gunaratne told a media briefing held at the National Institute of Sports Science in Colombo today.

“It was only later that I saw that Mr. Illyas, my deputy, had published his manifesto with the media and at that point I announced that I will not come forward on principle that this should not be taken with a contest. It should be handed over properly.”

“From the beginning I said, if there is a contest I would not come forward. I only got to know that Rizly was coming forward a couple of weeks ago. If there was a misunderstanding I apologise to Rizly and his team,” he also said.

“Being my deputy for two years, he is well aware of the SLR financial situation and our National team’s performance, both Men’s and Women’s and all other development activities we have planned. It is good that somebody in the system is taking over from me. I wish him all the very best and will be there to provide any support,” Gunaratne explained.

Illyas, the current Deputy President of SLR, also emphasized that any misunderstanding between the two had been cleared up.

“Our President has told exactly what has happened; it was only after I put out the manifesto that the Provincial Unions knew that I was coming forward. It took a little bit of time to communicate due to the whole COVID-19 situation. We both apologised to each other on the phone if we had a misunderstanding and hurt each other’s feelings. He gave me his blessings and said, ‘let’s call for a press conference and go forward’, and that’s why we are here today. I have learnt a lot of things from him during my two years as his deputy; especially where good governance and other things are concerned, and I am ready to go now,” Illyas said.

Sri Lanka Rugby has scheduled to conduct its AGM on August 29.