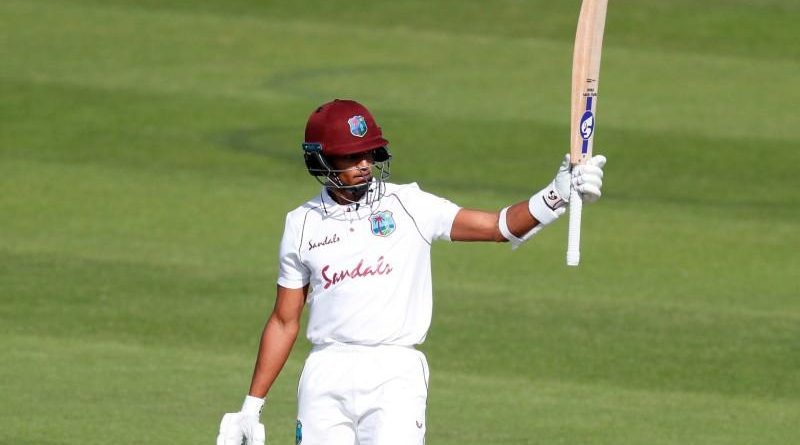 Shane Dowrich steered the West Indies into a first-innings lead of over a hundred runs against England on the third day of the first Test at Southampton on Friday.

Dowrich made 61 after opener Kraigg Brathwaite had top scored with 65 in a total of 318 all out.

Stand-in captain Ben Stokes led England’s attack with four for 49 to follow his top score of 43 in the hosts’ 204.

But that still left West Indies 114 runs ahead in a match that marks international cricket’s return from lockdown.

Stokes’ haul included the wicket of West Indies Captain Jason Holder for just five, with the England talisman having fallen to his rival all-rounder during the towering paceman’s Test-best six for 42 on Thursday.

And when Stokes bowled tailender Alzarri Joseph, he had his 150th Test wicket.

But Dowrich completed a fine fifty as the wicket-keeper held firm for 115 balls until he was caught down the leg-side by opposing gloveman Jos Buttler off Stokes.

West Indies resumed behind closed doors on 57 for one with the first sunny blue skies of the match providing ideal conditions for batting.

Barbados-born Archer nearly had Shai Hope lbw for 16 but a West Indies review revealed a no-ball.

Hope, however, was still on 16 when he edged off-spinner Dom Bess to first slip where Stokes, captaining England in the absence of Joe Root, held a sharp catch.

It was an encouraging moment for Stokes, who could have been forgiven for second-guessing himself after deciding to bat first on winning the toss.

But, as he has so often done before, Stokes made a vital breakthrough when he trapped Brathwaite in front of the stumps.

Shamarh Brooks made a promising 39 before he was caught behind off James Anderson, with England’s all-time leading Test wicket-taker returning innings figures of three for 62.

Jermaine Blackwood gave his wicket away by driving Bess (2/51) straight to Anderson at mid-off.

Dowrich, however, drove Bess for two fours in three balls before, on 25, he hammered a drive the Somerset bowler could only parry.

Roston Chase drove the first delivery with the new ball, from Wood, for four before he was lbw to Anderson for a painstaking 47 off 142 balls.