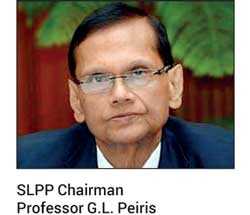 The Sri Lanka Podujana Peramuna (SLPP) yesterday pledged to hold the long-delayed Provincial Council (PC) Elections within this year, while assuring it would address shortcomings which delayed polls for over two years.

Speaking to reporters at the SLPP Head Office, Chairman Prof. G.L Peiris assured that the SLPP would take necessary measures to hold the PC Elections within the year once Parliament was convened. The Provincial Councils Election Act No.02 of 1988 was amended in 2017 and the Provincial Councils Elections (Amendment) Act, No. 17 of 2017 was passed. The delimitation report defining the electorates for the new act was rejected unanimously by Parliament and the Supreme Court ruled that the PC Elections could not be held without the delimitation report being completed and passed in Parliament.

He pledged that the SLPP would consider holding the PC Elections as a priority task and assured it would take necessary measures to address the issues which delayed the polls.

“I do not believe that we have to start from stage one. We have to utilise what has been done already and take it forward. The committee headed by Minister Dinesh Gunawardene has already done a good job; therefore what we should do is consider new ideas and work on the initial framework to hold the election without any further delay,” he said.

Prof. Peiris pointed out that most of the political parties had agreed to amend the existing electoral system and to introduce a new system.

He noted the PCs were vital to daily life activities of the public, adding that delaying the PC Elections could therefore impact the standard of living of the public.

Prof. Peiris accused the previous administration of delaying the PC Elections and assured that under the SLPP Government, elections would be held on time to protect citizens’ right to election of their representatives.