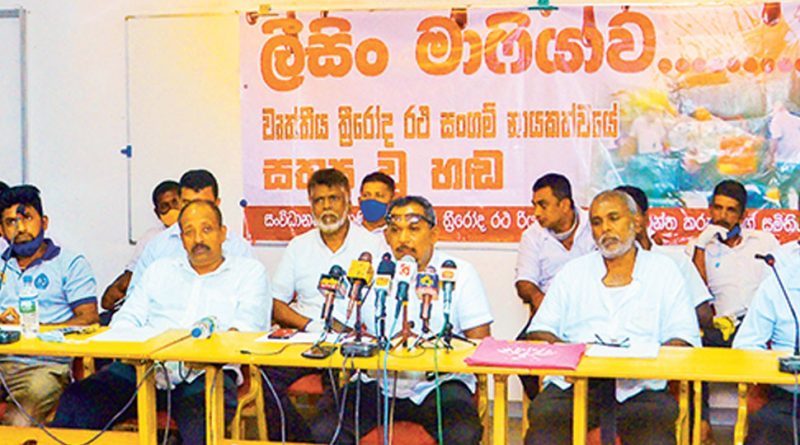 The National Consortium of Three Wheeler Drivers and Industry Workers Union demanded the government to come up with a national policy on professional three wheeler drivers.

The consortium noted that they have been fighting for 40 years to establish a regulated industry for three-wheel drivers.

“There are only 6,000 State-owned buses and 22,000 private buses in the transport service. To regulate 28,000 buses, there are nine Provincial Ministers, one Central Government Minister, one State Minister and a group of State officials. There are 900,000 professional three-wheel drivers, but not even a single Minister nor a Circular to regulate and address issues of this industry,” noted the Secretary of the Union, L. Rohana Perera.  He further complained that multinational taxi applications take 20 per cent commission from drivers. Even though this makes the cost of the ride cheap for customers, it is the driver who bears the burden, he claimed.

“The Government allowed these apps to function even during the COVID-19 pandemic. If the President is concerned on keeping our country’s money circulating within it, isn’t allowing these multi-national apps to function despite a crisis situation, straight away sending our money out of the country?” questioned a member of the Union.

The Union further stressed that the Government should have a set of fixed regulations common to professional three-wheeler drivers and taxi-apps.

Meanwhile, the Union also addressed the prevailing leasing issue mentioning that the solution the Government has given for now is like a wound that will start bleeding severely after six months.

“They have given us a six month grace period concerning the leasing payments but we have to pay 11.5 per cent interest afterwards. What is the point of this grace period?” questioned members of the Union.  They also mentioned that the family of the late Sunil Jayawardana who fell victim to the leasing mafia, should be provided relief through Government funding.