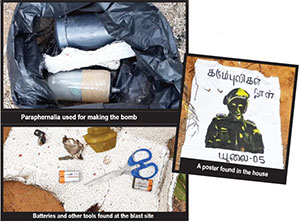 The bombe which exploded prematurely in a house at Iyakkachchi, Kilinochchi, on Saturday, was to be taken among other things to Mullaithivu for a clandestine operation to mark the Black Tiger day, which fell on Sunday, according to police.

The first Black Tiger, Vallipuram Vasanthan, drove a small truck laden with explosives into the army camp at Nelliady, Jaffna on 5 July 1987, killing himself and some soldiers. Immediately afterwards, LTTE cadres stormed the camp overwhelming the stunned soldiers.

Investigators said a group of former LTTE cadres and several youth in Kilinochchi had been planning to mark the Black Tiger Day.

Following Saturday’s incident, the victim’s wife, a school teacher from Iyakkachchi was arrested by the Terrorist Investigation Division (TID), on Sunday. She is a former LTTE cadre. The victim, identified as Menon, is a former LTTE intelligence wing member.

Menon was first admitted to the Kilinochchi Hospital but subsequently transferred to the Anuradhapura Hospital as his condition worsened.

When the police searched the house, they found two bombs and detonators.

The investigators said that the premature explosion of the bomb prevented the LTTE supporters from carrying out their plans to mark the Black Tiger Day.

Initial investigations revealed that the ex-LTTE cadre Menon had surrendered to the Army during the last phase of the war and thereafter undergone rehabilitation. After completing rehabilitation, he joined a newly formed political party in the North, according to police.

Security services have commenced a separate investigation into an incident where a group of Jaffna undergraduates marked the Black Tiger Day on Sunday night. Leading activists of several student bodies organised the event, where student participants were asked to offer flowers and light candles in front of the pictures of the dead Black Tigers, according to police.