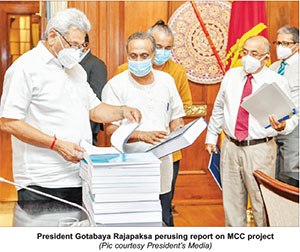 Prof. Lalithasiri Gunaruwan, who headed a high level government inquiry into the proposed finalisation of Millennium Challenge Corporation (MCC) agreement yesterday (25) told President Gotabaya Rajapaksa that the previous yahapalana administration and the US had signed two agreements in 2017 and 2018 as regards two phases of the project. Prof. Gunaruwan said that though Sri Lanka received USD 7.4 and USD 2.6 mn in 2017 and 2018 respectively, the inquiry team couldn’t find any supporting documents.

The President’s Office spokesperson said that the report would be made available to the public.

The President’s Office quoted Prof. Gunaruwan as having said that the Land Commissioner was of the view the project couldn’t be implemented legally.

The meeting was also told that once the parliament approved the project, views contrary to the agreement or any other proposal would be considered a move against the original agreement. Referring to the contents of the proposed agreement, Prof. Gunaruwan pointed out that the AG would be denied the right to represent the government in court. The academic said that the proposed agreement violated the powers exercised by parliament.

The committee yesterday handed over the final dozzier, having submitted an interim report on Feb 17, 2020.

According to the Finance Ministry during the previous administration, the project worth USD 480 mn had been approved by the Attorney General. (SF)