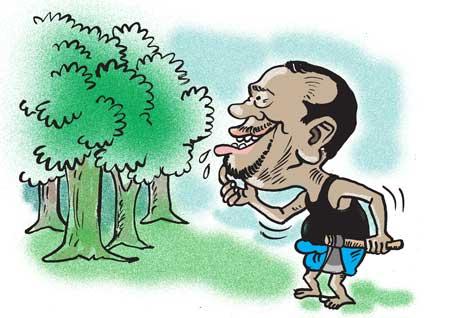 A government purohita has embarked on a new massive project: a new zoological garden inside the forest off Thalawa!

There is a move afoot to clear 70 to 80 acres of the thick jungle to set up the proposed zoological garden. And the purohita is set to present the proposal to the top team shortly for the necessary sanction, they say.

However, on hearing about the proposed move, a very high authority in Colombo is said to have remarked with a derisive smile: “What more zoos for us when we find it difficult to maintain the ones we have already got!” He also had added: “Besides, what is the use of opening a zoo in Rajarata where the people can sight enough elephants, leopards and bears in broad daylight?”

Meanwhile, some concerned individuals and organizations have reportedly made representations to government bigwigs saying that the proposed zoological garden project would lead not only to the destruction of a swathe of a verdant forest cover but also to a host of corrupt dealings.

The purohita from Rajarata who has mooted this project is a politico known to have been involved in several questionable projects. He has planned to establish some institution in Piliyandala area as well.

By the way, those having the interest of the country at heart lament that the purohitas like the ones who propose to construct cricket stadiums and zoological gardens when the country is in the throes of a coronavirus epidemic only cause immense damage to the image of the government in power!