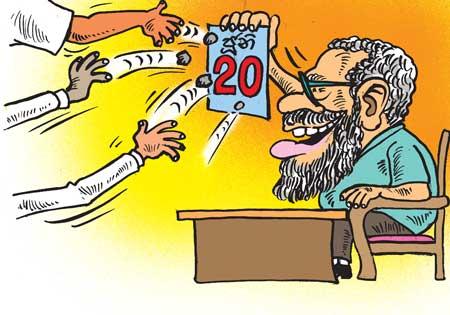 The opposition elements have started placing one obstacle after the other to holding the general polls on June 20. They seem to have developed an unusually strong aversion to this poll date despite the government’s assurance that the spread of the coronavirus has been brought under control.

However, the fact remains that it was not the government that set the poll date, but the poll commission. The commission had on its own postponed to June 20, the date originally fixed for April 25.

Why some opposition people were up in arms against holding the general polls despite the assurance by the health authorities as well that the situation had been contained, posed a conundrum to the characters big and small in the government. They started splitting hairs over why some opposition characters were averse to holding the polls. Meanwhile, the country’s Number One quietly listened to their arguments with a telltale smile.

Finally, Number One decided to reveal the real cause behind the opposition characters’ aversion to holding the polls on June 20.

“They raise their objections to holding the polls on June 20, not because of the coronavirus threat,” Number One explained to government politicos. “By a strange coincidence, my birthday falls on June 20. And they fear that if the polls are held on a day that happens to be my birthday, the government is sure to register a landslide victory!”

Number One continued: “They still remember the debacle they suffered when the polls were held on November 18 in 2005 which happened to be President Mahinda’s birthday! They are now saying this and that while hiding the real reason! After all, they can’t blame me for it because it was not I who fixed the poll date!”