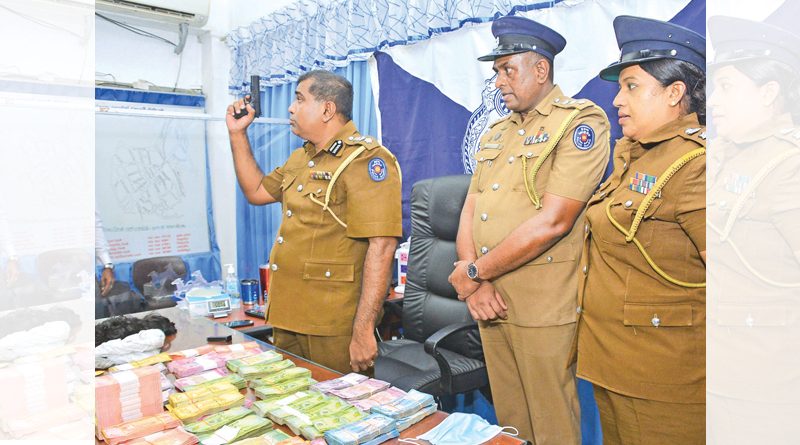 Police officers with the pistol used and the robbed cash at the Maradana police station yesterday. Picture by Washitha Patabendige.

A doctor who stole over Rs.7.9 million brought to the Colombo National Hospital to pay overtime of employees was arrested by the police yesterday.

The suspect identified as a doctor (33) visiting the National Hospital for his post-graduate studies had fled in a trishaw after stealing the money brandishing a pistol found to be a ‘toy’ on his arrest.

The suspect had been nabbed by two trainee police constables attached to the State Intelligence Service on duty at the hospital and Matara Child and Women’s Bureau OIC, Chief Inspector Varuni Bogahawatte who was visiting the hospital for official work.

Police media spokesman SP Jaliya Senaratne told media in Colombo yesterday that the suspect medic who had walked into the room where the overtime payments to employees was to be paid had threatened a hospital worker brandishing a pistol (found to be a toy ) had taken the cash which was in a safe.

The suspect had then got into a trishaw and had fled the scene.The two police officers upon hearing the shouts of hospital employees had given chase in a trishaw plying on the road.

Meanwhile Chief Inspector Varuni Bogahawatte who was arriving at the hospital in a vehicle too had given chase after seeing the suspect with a gun.The three officers had been able to apprehend the suspect a short distance from the hospital.