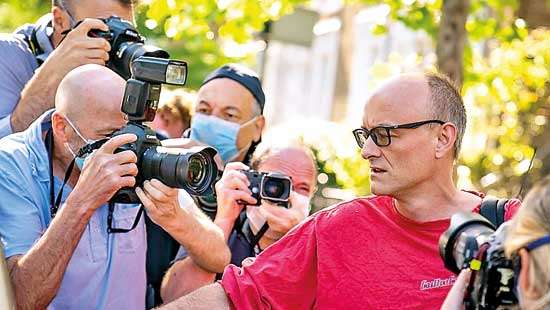 LONDON REUTERS May 25- Prime Minister Boris Johnson faced mutiny in his party and fury across Britain on Monday for refusing to sack his closest aide Dominic Cummings, accused of flouting the coronavirus lockdown by driving 250 miles from London.

Defending one of Britain’s most powerful men, Johnson said at the weekend Cummings acted “responsibly and legally and with integrity” when he travelled in March from London to Durham in northern England with his son and his wife, who was ill with COVID-19 symptoms.

In an unusual outpouring, more than a dozen Church of England bishops publicly condemned Johnson and Cummings.

“The PM’s risible defence of Cummings is an insult to all those who have made such sacrifices to ensure the safety of others,” said Johne Inge, the bishop of Worcester, on Twitter.

Many believe that was hypocritical given the government’s mantra at the time that everyone should stay at home. Those in a household where anyone has symptoms are supposed to self-isolate at home for 14 days.

“What planet are they on?” asked a front page headline in the Daily Mail, an influential right-wing paper usually supportive of Johnson.   With a death toll around 43,000, Britain is the worst-hit country in Europe and the government was already under pressure over its handling of the pandemic.

Scientists and lawmakers said the Cummings furore would make it harder to ensure the public kept complying with official social distancing guidance.

About 20 Conservative lawmakers defied Johnson by calling publicly for Cummings to quit or be sacked. They and others reported being inundated with mail from constituents who had followed the guidance and now felt there was one rule for people close to Johnson and another for everyone else.

John Wilson, a man who lost his wife Pauline to COVID-19 in March and was unable to be with her in hospital, spoke of his “rage” at Johnson in a letter to his local lawmaker which he posted on Twitter.

“I would like to know what, if anything, you intend to do about this,” Wilson said in the letter.