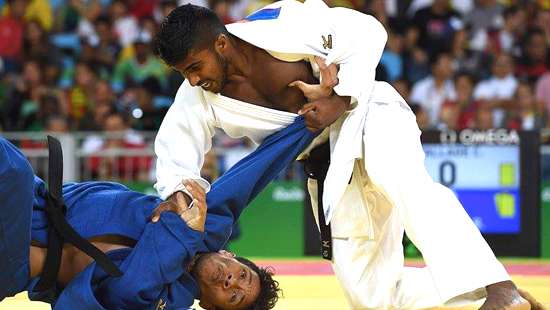 Judoka Chamara Nuwan Dharmawardena who won a historic gold in judo at the 13th South Asian Games (SAG) in Kathmandu and represented Sri Lanka at the 2016 Rio Olympics is targeting a medal at the 2022 Asian Games in Guangzhou, China.

The first judoka to represent Sri Lanka in the Olympics, Dharmawardena competed in the under 73kg weight class and was placed ninth overall in his category.

He was following a six-month training programme in Slovakia in preparation for the Tokyo Olympics but the coronavirus pandemic forced him to return home on March 21 and after a 21-day quarantine period is continuing his fitness training at home.

“I took part in the South Asian Games while training in Slovakia which helped me win a gold medal for the first time in the history of the Games,” said 28-year-old Dharmawardena who is attached to the Air Force Sports Club.

A product of Wewatenne MV, Gampola and Jinaraja College, Dharmawardena who won the All Island School Games in 2007 has bagged over 50 medals at school, national and international level in the sport of judo.

Recipient of the Sport Ministry’s most outstanding sportsman award for six consecutive years, he has not been able to participate at the National Judo Championship which has not been conducted in the past few years because of administrative issues in the governing body of judo.

“Actually, there are only two judo competitions in a year. One is during the National Sports Festival and the other is the Nationals. So we don’t have a chance to improve our standard. Countries like India and Pakistan have competitions every month or once in two months. Although there are many talented judokas in Sri Lanka, they can improve their standard here by training only,” said Dharmawardena who has been taking part in international competitions since 2011 including the 2018 Asian Games in Indonesia.

Dharmawardena was fortunate to gain further international exposure after being nominated by the National Olympic Committee of Sri Lanka and the Sports Ministry to follow a training programme in Slovakia.

“The Slovak experience was unbelievable. Initially I could not believe that countries have such modern equipment and facilities to train athletes for different disciplines. The difference from what I learnt at home was the knowledge I gained about different fighting styles and speed of the game,” he said.

Taking part in a practice tournament with the participation of 13 countries, he applied the new techniques he had acquired by performing creditably competing in the under 75kg weight class winning his bout against an opponent from Bosnia by one point after fighting for eight minutes.

“We have to regularly keep on competing in tournaments if we are to excel at international level. Our judokas cannot progress because they don’t get such opportunities. Even I don’t have competition at home. My standard will go down if I train only in Sri Lanka without any competition. I strongly believe we can win medals at international level if our judokas take part in tournaments abroad. Our judo players and coaches need to upgrade their technical knowledge every one or two years. There is less appeal for judo as a sport in Sri Lanka. As a result sponsors are not attracted to judo. This is a sad fact,” lamented Chamara Nuwan.