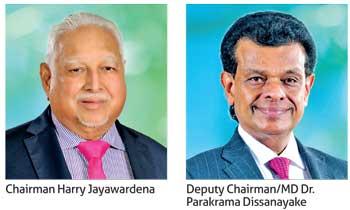 The well-diversified nature helped Aitken Spence PLC to weather two back-to-back crises within one financial year but its leisure sector tilt still had a bearing on the group’s performance, as its tourism business weighed on the group’s revenues and profits.

Aitken Spence has operations in 16 business segments under four main verticals in Sri Lanka and overseas and its leisure operations account for the largest share of the group revenue and operating profits.

The group reported an operating profit of Rs.2.5 billion for the period under review, compared to Rs.3.4 billion a year ago.

However, Aitken Spence said the drop in revenues was compensated by the commencement of operations of Heritance Aarah in the Maldives, during the third quarter of the year.

For FY2019/20, the group’s leisure sector operations generated revenues of Rs.24.4 billion, compared to Rs.28.3 billion last year. The operating profits more than halved to Rs.1.7 billion. The impact of the leisure sector on the group financial performance during the ongoing quarter and the next could be much pronounced, due to the prolonged lockdowns and suspension of travel. “The group’s hotels in Sri Lanka, the Maldives and Oman, also have been temporarily closed, while very limited operations are taking place in the hotel in India,” Aitken Spence said in late April.

“The resumption of operations in South Africa completed a short-term assignment, which supported the performance of the sector,” Aitken Spence said in a statement.

Aitken Spence said the construction of its waste-to-energy plant was nearing completion but was delayed due to pending the arrival of some of the contractor’s technical experts from overseas for the testing phase, due to the pandemic. The project is the first of its kind in Sri Lanka.

The group’s investment in the printing and packaging segment in the South Pacific region is nearing completion and is expected to commence full-scale operations soon.

“This strategic investment will support the printing and packaging segment’s aspirations to expand services in the South Pacific region using its expertise in sustainable printing to differentiate their value proposition,” Aitken Spence said.Meanwhile, the group’s services segment, which houses insurance, money transfer and elevator businesses, reported revenues of Rs.1.5 billion, compared to Rs.2.2 billion in the previous year.

The operating profit of the segment for the year was Rs.301.6 million, compared to
Rs.292 million.

Business tycoon Harry Jayawardena-controlled Melstacorp and Rubicond Enterprise hold over 66 percent of the issued shares of Aitken Spence while the Employees’ Provident Fund has a 5.07 percent stake in the company, being the third largest shareholder.