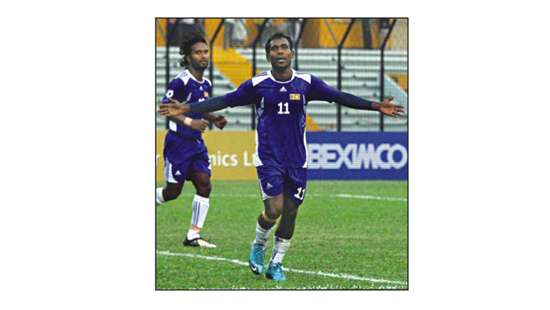 The standard of football in Sri Lanka is on the decline not because players lack skill but because the selection committee members are weak and biased, according to veteran football star Kasun Jayasuriya.

National teams all over the world are successful because they apply strict standards to select players but if it is done to please officials it will only lead to disastrous results, said Jayasuriya.

“The downfall of football in Sri Lanka is because members of the selection committee are old fashioned and have outdated views. Although they may be former national players and popular personalities, they lack the vision and are not in touch with the present trends,” he said.

Jayasuriya was an outstanding football star who excelled at school, national and international level in the mid 90s. He learnt the rudiments of football at Dharmadutha College, Badulla before going on to represent St. Joseph’s, Colombo and Sri Lanka with distinction. He turned out for leading clubs in the country such as Old Bens, Pettah United, Ratnam, Negombo Youth and Saunders, representing school and the national team during a career spanning 18 years.

He participated in 50 international matches, scoring 27 goals which was a record at the time. He also achieved the distinction of winning the Golden Boot award in the domestic Champions League tournament for three consecutive years.

He also wore the captain’s arm-band of the national team for several matches. A member of the Sri Lanka team which won the Maldivian Freedom Trophy tournament in 2000, he also took part in SAFF (South Asian Federation Football), Asian Cup, Pre-Olympic, FIFA World Cup qualifiers and other invitational tournaments.

“I always respect experienced players who have represented Sri Lanka in the past. I appreciate their outstanding skills. We can still learn a lot from their knowledge. However, although they have been very good players it is clear they have not been a success as selectors. One reason is because they bow down to pressure from certain quarters. There are some selectors who can’t see beyond 10 metres. Can we expect proper selections from these people?” asked Jayasuriya.

Invited to play as a professional for clubs such as Maldives’ IFC (Islands Football Club), India’s Becko and Goa’s Dempo for several years, Jayasuriya has gained a reputation as a leading football coach. In fact, he is the youngest coach from Sri Lanka to obtain a C Licence and B Licence. He expects to obtain his A Licence in the near future.
Jayasuriya is dismayed to see Sri Lanka falling to the depths in the FIFA rankings.

“When I first played for the national team, Sri Lanka were ranked 180 in the FIFA rankings. Now we have dropped to 206. We are just two or three places away from being ranked the worst team in the world,” he lamented.

“When those who had never played football were occupying key administrative posts in the federation, we thought football was suffering because of the incompetency of these officials. But now those who have played football are in office. However, the changes we expected never materialised. We had a target of being among the top 10 in 2020 but we have now lowered our goal to triumph at the SAFF tournament in 2030. My feeling is if we are to develop football there has to be a change in the administration. It is time to hand over administration to new people who have new ideas.

I have ambitions of going forward as a football coach but I have no intention of getting into football administration,” said Jayasuriya.

“The success of a football team depends on not only on the coach but having a good manager as well. And if the manager is not competent, then the discipline of any team cannot be maintained. It is unfair to blame the entire team for the mistake committed by a single individual,” he opined.

“When you look at history of football in Sri Lanka, the national team has been successful when they had foreign coaches. We won the SAARC trophy in 1995 and Maldivian Trophy in 2000 because of the expertise of foreign coaches,” he pointed out.