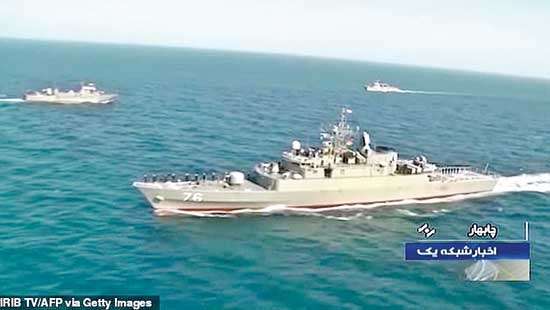 The Iranian Jamaran frigate (front, centre) is pictured during a training exercise alongside Chinese and Russian forces (DM)

An Iranian warship has accidentally opened fire on one of its own support vessels during a training exercise in the Gulf of Oman, killing 19 and leaving 15 injured.

The Jamaran, a frigate, had been attempting to hit a target with one of its Noor cruise missiles when it accidentally struck a support ship named Konarak instead.

The Konarak had been placing targets for the Janaran to hit but remained too close to one of them causing the missile to lock on to it by mistake, state-run media said.

Nineteen people were ‘martyred’ in the friendly-fire incident, the ISNA news agency said, while another 15 were admitted to hospital in a ‘good condition’.

Iranian media denied earlier reports that the Konarak had sunk, saying the vessel was towed away for inspection afterwards.

The Konarak had been overhauled in 2018 and was able to launch sea and anti-ship missiles but was not actively participating in the drill, state outlets said. The Dutch-made, 155ft vessel was in service since 1988 and had capacity of 40 tons.  The friendly fire incident happened on Sunday near the port of Jask, some 790 miles southeast of Tehran, in the Gulf of Oman, state TV said.

Iran regularly holds naval exercises in the Gulf of Oman, which is close to the Strait of Hormuz, the narrow mouth of the Persian Gulf through which 20% of the world’s oil passes.