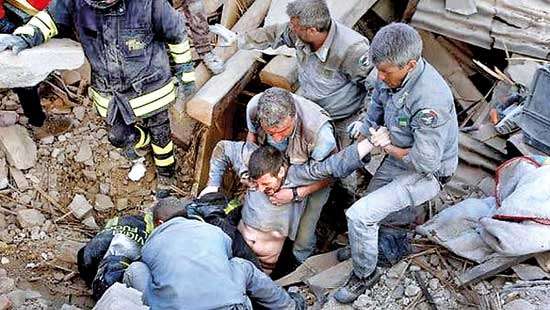 File photo: The last major earthquake to strike Italy hit in Umbria region in 2016 with a magnitude of 6.2, killing 299 people and leaving hundreds injured (DM)

A mild earthquake shook Rome on Monday morning as the city tries to adjust to life following coronavirus lockdown.

The quake had a magnitude of 3.3 and struck at 5.03am with an epicentre in Fonte Nuova, a small town around 10 miles outside the capital.

Firefighters said they had received numerous inquiries from people who had been shaken awake, but no reports of damage or injuries.

Residents reported hearing a loud roaring noise for around 30 seconds just before the shaking started, sending people scrambling into the streets.

‘People woke up, screams of fright were heard from our building,’ a man identified only as Fayruj told Italian news site AGI.

Others said they had been thrown out of bed by the shaking, with panic spreading quickly through a city already on edge over coronavirus. In 2016, a major earthquake with a magnitude of 6.2 struck the Umbria region of central Italy, killing 299 people and injuring hundreds more.