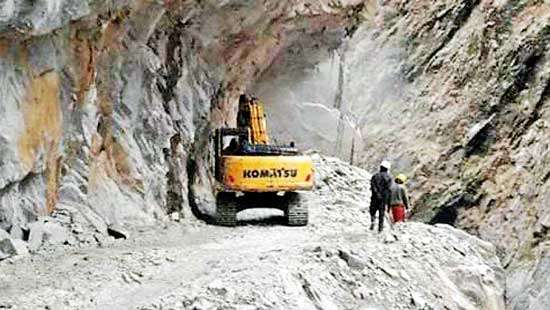 New Delhi, (Hindustan Times),  11 May 2020- The Nepal government summoned the Indian envoy on Monday to protest against the construction of a road in Lipulekh area that is claimed by Kathmandu, signalling an intensification of the diplomatic row on the matter.

India has on Saturday rejected Nepal’s initial protest against the construction of a road to Lipulekh on the border with China, saying the region is “completely within the territory of India” and both sides could resolve such boundary issues through diplomatic dialogue.

People familiar with developments said India’s envoy Vinay Mohan Kwatra was summoned to the foreign ministry in Kathmandu, where Foreign Minister Pradeep Gyawali handed over a diplomatic note of protest.

The foreign ministry also tweeted: “Foreign Minister Hon. @PradeepgyawaliK conveyed Government of Nepal’s position on boundary issues to Ambassador of India to Nepal H.E. Mr. Vinay Mohan Kwatra at a meeting held at MoFA today and handed over a diplomatic note in this regard.”

No further details were immediately available. There was no immediate response to the development from Indian officials.

The border row erupted months after Nepal was irked by the depiction of Kalapani as part of Uttarakhand in new Indian maps showing the union territory of Jammu and Kashmir and Ladakh. Nepal had sought talks to address the Kalapani issue but New Delhi rejected Kathmandu’s protest, saying the new maps accurately depict Indian territory.

“The recently inaugurated road section in Pithoragarh district in the state of Uttarakhand lies completely within the territory of India. The road follows the pre-existing route used by the pilgrims of the Kailash Mansarovar Yatra,” External Affairs Ministry spokesperson Anurag Srivastava said.

Gyawali, who was summoned by the Parliament’s international relations committee, added Nepal would hold talks with China after sorting out the issue with India, The Kathmandu Post reported.