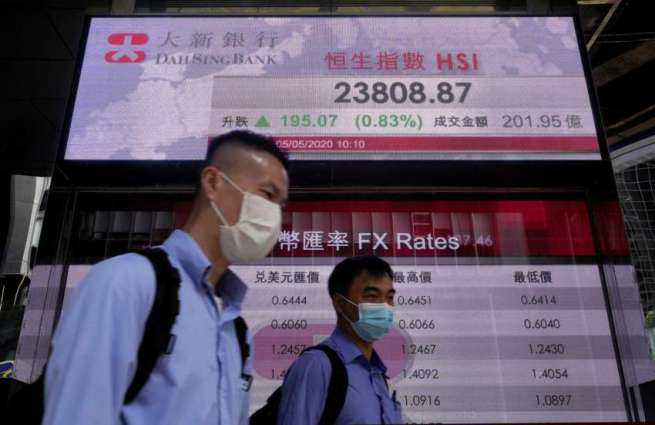 (Hong Kong) AFP: Most equities rose again yesterday as investors grew increasingly, but cautiously, hopeful that the worst of the coronavirus had passed and as countries begin to slowly open up from lockdown.

While a string of data highlighted the calamity visited upon the global economy by COVID-19, a slowdown in both infections and deaths in some nations is allowing them to ease restrictions that have kept half the planet stuck at home.

Federal Reserve Vice Chairman Richard Clarida provided an upbeat outlook, saying the US economy could see positive growth in the second half of the year, though tempered that by saying it was dependent on containment of the virus.

“Risk sentiment continues to be buoyed on news of more countries/states rolling back containment measures, followed by reports of more companies reopening operations,” said Tapas Strickland of National Australia Bank.
“That is giving hope that rollback will allow economic activity to resume and that we may be passed the trough in economic activity.”

Hong Kong and Seoul rose more than one percent, while Shanghai put on 0.6 percent and Wellington added 0.8 percent. Taipei was flat but Sydney slipped slightly.

Singapore put on one percent, with Singapore Airlines surging as much as 21 percent at one point on hopes for a pick-up in business thanks to the easing lockdown measures. It pared the gains to sit around 10 percent higher in late trade. In early trade, London was slightly higher but Paris and Frankfurt were slightly lower. Mumbai soared more than one percent on stimulus hopes following data showing India’s factory and services activity collapsed in April. The services purchasing managers index crashed 43.9 points to 5.4 in April — putting it in single digits for the first time — according to IHS Markit. Anything below 50 in the gauge points to contraction and with the sector making up more than half of India’s gross domestic product, the group warned the economy likely shrunk 15 percent in the month. Fears of a second virus wave as the lockdown eases were keeping traders on their toes.
“It is absolutely dependent on what happens with respect to infection rates and whether there is the so-called second wave,” Andrew Wilson, at Goldman Sachs Asset Management, told Bloomberg TV.

Observers are also keeping tabs on China-US relations after President Donald Trump hit out at Beijing over its handling of the pandemic, sparking fears of a renewal of the economic superpowers’ trade war that hit markets last year.

“Worries that China could retaliate against the US virus and trade accusations are real,” said OANDA’s Jeffrey Halley.

“If anything can undermine a peak virus rally, a US-China trade war would do the job nicely.”

Friday sees the much-anticipated release of US jobs data for April, with consensus forecasts that unemployment has surged to an incredible 16.2 percent — the highest since 1948 — from 4.4 percent. However, some economists expect it to rise even higher. Oil markets were flat, having doubled since last Tuesday fuelled by hopes that demand will begin to pick up as people start going back out and start spending after the long-running lockdown in key economies.

“With economies reopening around the world and the market rebalancing in full swing, traders are positioning for a multi-staged pick-up in demand initially led by gasoline demand at the pump as consumers emerge from lockdowns,” said AxiCorp’s Stephen Innes.

He pointed out that as China emerges from its lockdown, figures showed traffic in the country’s big cities was higher than pre-virus levels, suggesting people were opting for private travel rather than public transport, which would be good for petrol demand.