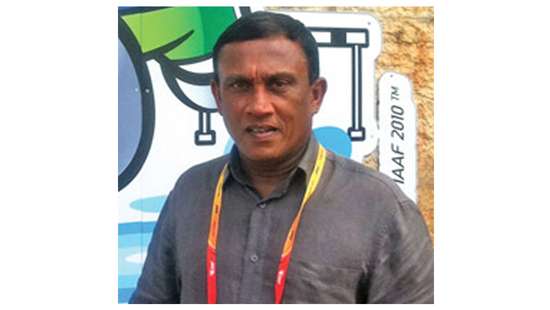 Sri Lanka’s national level junior athletes have been deprived of winning at least 10 gold medals since the two international competitions they were scheduled to take part in were postponed indefinitely, according to the President of the Athletics Association of Sri Lanka (AASL) Maj. Gen. (Rtd) Palitha Fernando.

However, both these events have now been cancelled because of the coronavirus pandemic dashing Sri Lanka’s hopes of bagging at least 10 gold medals going by the comparative records at Asian level and aiming for high performance at the World meet. Both these international competitions are for athletes in the under 20 age group.

“The standard of our junior national athletes, both boys and girls, have reached an unprecedented high in the recent past. As a result we were planning to send 20 athletes for the Asian Championship and five for the World Championship,” said the AASL President. “However, it has come to a stage where it is impossible to hold these two competitions in any country this year. Furthermore, since these two international competitions are age group events (under 20 level), the majority members of the national squad will not be eligible to participate in these two championships after this. Therefore, even if the competition is held next year, we cannot expect the same results as we expected this year,” he added.

“Although the Tokyo Olympics has been postponed by a year, there is no environment to stage international or local competitions at some future date or place this year. Maybe it could be held in the early part of next year. Therefore, qualifying for the Tokyo Olympics in athletics may be a difficult task,” Maj. Gen. (Rtd) Palitha Fernando told the Daily Mirror.

Meanwhile, the first International Online Seminar for Athletics Technical Officials conducted by the South Asian Athletics Federation (SAAF) and Athletics Federation of India (AFI) was held from April 25 to 30. Over 900 technical officials from South Asia took part in this seminar, including 14 from Sri Lanka who were selected by the AASL. Seven International Technical Officials who are at the top of officiating Athletics in major games such as Olympics, World Athletic Championships, European Athletic Championships, etc. delivered lectures on the rules and interpretations of Athletics with AASL President being Chairman of the session on the third day of the seminar.

Following the success of this seminar for technical officials, the South Asian Federation is planning to hold a similar event for coaches in the near future.

The physical training of the National pool formed in preparation for the Olympics, World and Asian Championships has been affected because of the coronavirus but national athletic coach Y. K. Kularatne has formulated training schedules for the individual athletes.

Since a majority of the national pool comprising 80 athletes are from the Tri-Services, Police and private sector employees, they are not undergoing economic hardships during this present crisis while at the same time coaches and technical officials who are mostly employed by the Sports Ministry and schools are not affected, the top AASL official said.