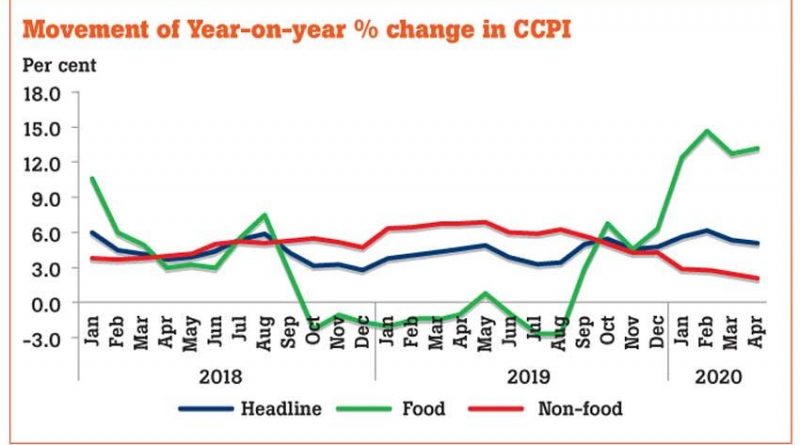 Inflation for the month of April was recorded at 5.2 percent, as the prices measured for the 12 months to April was slightly lower than the 5.4 percent recorded in March as higher base prevailed a year ago took effect resulting in somewhat muted prices in an otherwise hotter month for prices due to seasonal demand.

According to prices measured by the Colombo Consumer Price Index (CCPI), food prices rose in April on supply disruptions while non-food inflation remained unmoved as many of its price moving activities remained inactive as people were mostly forced to self-isolate at homes, except for some sections of health, housing, water, electricity, gas, fuel and transport sectors functioning as essential services.

However, prices of food items rose by 13.2 percent for the 12-months ended in April from 12.8 percent in March, largely inline with the expectations for short-term price pressures to mount on supply disruptions caused by the pandemic.

On a month-on-month basis, the prices rose by 0.4 percent in April from a 3.1 percent contraction in prices in March.

The Census and Statistics Department said fieldwork did not resume since they stopped data collection from visiting vendors and economic centres in mid-March as lockdowns went into effect, but said they continued to collect data either online or by phone from alternative data sources.

“Additionally, data collection in April was affected by the temporary closing or limited operations of certain types of outlets which are considered as non-essential. In particular, the collection of prices has become increasingly difficult but the CCPI programme attempted to collect as much data as possible,” the Department said. The data collected showed the prices of certain food items such as coconut, condiments, coconut oil and dried fish recording increases in April while prices of almost all varieties of rice, sea fish, canned fish, eggs, fresh fruit, vegetables, dhal, big onion and green chillies declining.

The Central Bank credited the timely interventions of the government to bring down the prices of certain food items, such as rice, dhal, big onion and canned fish, amidst COVID-19 outbreak moderated the price increases observed in the food category.

As government imposed curfew since mid-March to contain the spread of the China originated virus in Sri Lanka, it imposed price controls on certain essentials, albeit with limited success and ramped up the State mechanism to connect the farmer and the producer with the end consumer with mixed success.

Meanwhile, the core prices of the economy measured barring the often-volatile items such as food and energy, picked up in April to 3.1 percent from 2.9 percent in March.

Although the Central Bank is pumping liquidity in billions and the Treasury is spending billions on millions of people to safeguard them during the pandemic, there is limited scope for the inflation to rise in a big way due to depressed demand, which could prevail during most of the remainder of the year due to impaired income.

Analysts and rating agencies opined that although immediate term price pressures could persist, the yearlong prices could hover between 4 to 7 percent range or even below.

Further, the mostly depressed commodity prices and the muted prices expected on locally produced foods as a result of the ongoing cultivation revolution, could keep the prices lower for longer.