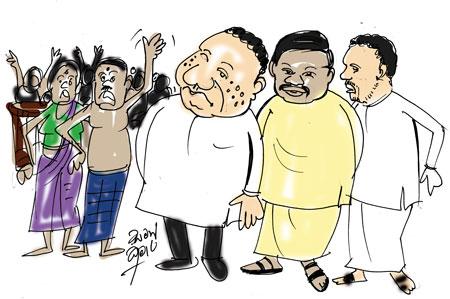 Three politicos who once held high office in yahapalanaya currently getting ‘poor relative’ treatment from Pohottuwa may not get nominations from their alliance to contest the upcoming polls, they say.

These three politicos – one of them – a roly-poly one – hailing from a cool clime in the upcountry rejected by the electorate at the last polls, another giving away sarees to woo votes and the third one – the son of a former leading political authority have failed to gain the acceptance of the people in their respective areas. Meanwhile, some Pohottuwa seniors are reported to openly say that the ‘turncoats’ from yahapalanaya deserve defeat at the upcoming polls, turning the awkward position of the trio for the worse.

By the way, the estate sector workers and trade unions too have turned against the trio, they say.