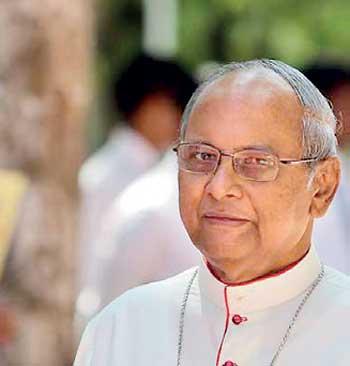 Everyone should come together as a nation to prevent the spread of COVID-19, Archbishop of Colombo Cardinal Malcolm Ranjith said over the weekend.

The Cardinal told a press conference that it is time to forget political, religious or ethnic differences at this moment.

“Everyone should come together and play their part forgetting religious, ethnic and political differences to prevent this disaster,” the Cardinal said.

“There is no point in blaming anyone for whatever shortcomings that may have been in the process of preventing the disease from spreading now,” he added.
Also, he said all religions should conduct their respective observances and seek divine help to see the world through from this international crisis.

“One must also think as to what state a person would be if he or she contracts the disease especially when looking at others who are already infected,” Bishop Mendis said.
Also, a spokesman for the Catholic Church told Daily Mirror that services in Madhu church Mannar is also suspended while other dioceses may also follow the directive given by the government to stop gatherings in churches.