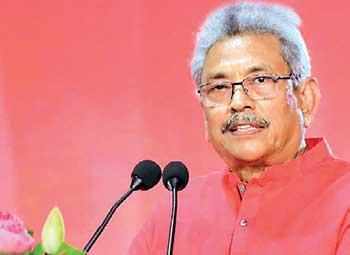 Our biggest challenge is to minimise the virus entering SL

President Rajapaksa made these proposals participating in a video conference with all SAARC leaders under the theme of “SAARC Leader on Combating COVID – 19, Setting an Example to the World”. This was an initiative by Narendra Modi, Prime Minister of India.

President Gotabaya Rajapaksa noted that presently there are 11 confirmed cases in Sri Lanka. The first identified was a Chinese tourist. She was successfully treated at the specialised Infectious Diseases Hospital (IDH) and has since returned back to China. The second case was a Sri Lankan tourist guide, but the tourists he was with who he had obviously contracted the virus from had already returned to their home country. Sri Lanka too has not reported any deaths due to the virus.

“Our biggest challenge is to stop or minimize the virus entering into Sri Lanka and control the spreading of the virus within Sri Lanka,” stated President Gotabaya Rajapaksa. “For this purpose, we have banned tourists and other people from about 12 countries, especially some EU countries, entering into Sri Lanka, following the guidelines and statistics relating to the spread of the virus, issued by the WHO. We have also banned tourists and others from South Korea and Iran coming to Sri Lanka.”

However, the challenge is with the Sri Lankan expatriate community wishing to return to Sri Lanka. “We have a large number of Sri Lankans working in Italy and South Korea. We cannot stop these Sri Lankans coming back to their home country”. Therefore, the president explained that steps had been taken to subject those returning to Sri Lanka to a 14-day quarantine period in quarantine centres.

The 34 students flown back from the then high risk Wuhan province by the national airlines carrier were also quarantined for two weeks, remarked the President. However, they did not contract the virus. The other 750 Sri Lankans who were living in other parts of China were put on a self-quarantine programme.

President Rajapaksa explained that besides the IDH that is close to Colombo, 12 other hospitals have also been designated to treat suspected or confirmed cases. Those who show flu symptoms have been asked to self-quarantine whilst seeking medical attention. Both the Police and the Public Health Inspectors are closely monitoring the progress of the suspected patients. Furthermore, a National Task Force with all major stakeholders empowered to take crucial decisions have been set up and meet on a daily basis with close and constant monitoring of all aspects relating to the spread of this deadly virus.

A number of measures had been taken to avoid all large gatherings, including cinema halls, sport events and international conferences, noted President Rajapaksa. All education centres from pre-schools to universities had been closed, ranging from two to six weeks. Even religious gatherings have been discouraged for two weeks. Besides these measures, sanitizing of public transport has commenced and 16 March had been declared a public holiday to keep people from the roads.

Like the other SAARC countries, Sri Lanka’s economy too had taken a nosedive, noted President. “Most of our tourists are from Italy, Germany and other EU countries, and now there is a ban on their coming. Our tourist industry was just recovering after last year’s April 21st terrorist attack. Our exports are also adversely affected. Therefore, I strongly recommend to the SAARC leaders to formulate a mechanism to assist our economies to tide over this very difficult period.”

The initiative taken by the Indian Prime Minister to address the CORVID 19 pandemic was greatly appreciated by all other SAARC leaders. This was an initiative to discuss with the SAARC leaders a roadmap to combat the virus.

PM Modi, as he opened the forum noted that our societies are deeply connected and thus we must be prepared together to face the challenges ahead.

“We know we have a serious challenge ahead of us,” he observed. “However, we still do not know the shape of the pandemic that we are to face in the coming days.’
He emphasised the need to be careful instead of panicking and that the threat should not be underestimated.

All the leaders spoke of their countries’ experience and the current status of the situation. While the situation is still within control, the austere measures taken to contain the virus had severely affected the economies. As the Bhutan Premier Dr. Lotay Shering noted, it is the smaller economies that have got hit disproportionately.

This was also attested by the President of Maldives Solih as he spoke of the effect on the Maldivian economy with the drastic decrease in the tourism sector. A quarter of Maldives’ GDP and two thirds of their Foreign Exchange comes from tourism. In addition, almost all forms of employment in Maldives are directly or indirectly related to the tourist industry. Even though there had been only 13 confirmed cases and no deaths yet, the industry had been declining since February.

At the conclusion of conference, PM Modi advocated a joint effort to combat the challenges posed to the region by the virus. He proposed a CORVID 19 emergency fund for the SAARC countries can draw from to deal with the related issues. Contributing to this fund would be an entirely a voluntary decision, said PM Modi. As a starting point though, he pledged USD 10 million, which through the India Foreign Ministry and related missionaries could be accessed.

PM Modi also assured shared resources and knowledge as medical expertise, testing kits and other equipment as well as online training for health workers. He also advocated the use of existing facilities as available in SAARC disaster management.

President also emphasized the need to create social awareness and the reasons behind government decisions to avoid misunderstandings or miscommunications. He also advocated the need for one central place to disseminate information or otherwise confusion will result. President Rajapaksa thanked PM Modi for taking this initiative to get all the SAARC leaders together to discuss this important issue. This sentiment was echoed by all other leaders and they too repeated that this should be a more frequent exercise.

Besides the IDH that is close to Colombo, 12 other hospitals have also been designated to treat suspected or confirmed cases