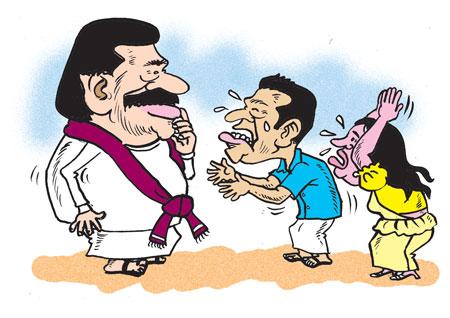 The main purpose of his visit was to express his gratitude to the people who remained loyal to him even after Maitri’s defection in an unexpected political development. By the way, the former young Pohottuwa Diyawanna member had chalked up a five-year development plan for the district to be announced at this function.

Meanwhile, on hearing that the Number Two was due in Pulatisipura to attend a public function, the former Number One Maitri, now the Pohottuwa led-alliance’s chairman had invited the former to attend a reception organised at his political office and express his solidarity with him.

The young politico’s wife, a picture of misery and distress, wailed that she would commit suicide by placing her neck under a tire of the Pohottuwa chief’s car if the latter were to attend the reception by Maitri. The people who had gathered there also implored him not to visit the former Number One’s office.

Because of these entreaties, the Pohottuwa chief left for Colombo with the hope of paying a visit to Maitri later, they say.