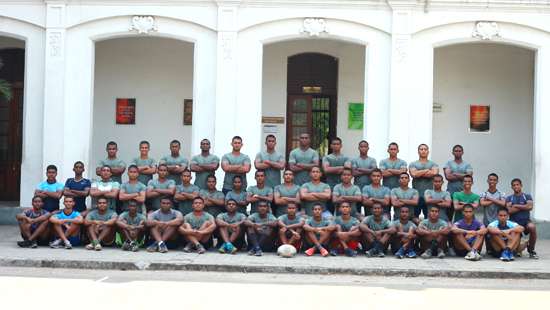 Wesley College will rally around their super star captain Samuel Ogbebor who has already made a name for himself following his performance in the last few years.

Head coach Niroshan Wettasinghe expects Ogbebor to lead from the front although Wesley has got very young side.

“Actually this year’s squad is a very young one and there are a lot of newcomers but that doesn’t really matter. I am sure they will look to do something different this year. Having said that, I must also mention that, we have got some senior players who are willing to give their best. Especially our captain Samuel Ogbebor is a well known player in Sri Lanka rugby and some people call him ‘Sri Lanka’s Itoje’ and we expect him to deliver the performance expected from him and also to lead the team towards a successful season,” Wettasinghe told Daily Mirror.

In addition to Ogbebor, Wesley would also look up to players like Eranda Harsha to perform to the best of their ability.

“Our centre Eranda is a sensational player and he has played first XV rugby for five years and that is a lot of experience and there is our vice captain Theekshana who is also a consistent player. So we have about two senior players in backline and three or four senior players in the pack, so I think this year our strength would be the forwards” added the head coach.

Ogbebor meanwhile claimed that being able to captain is a not a privilege but a responsibility.

“I know most people would say leading your school is a privilege but I would always take it as a responsibility. At the moment we have a really good squad and we had a lot of practice games coming into the season so the boys are well prepared,” the Wesley number eight told Daily Mirror.

He also added that they hope to win the league this time around.

“At the moment all we want to do is, give our best and somehow win the league title,” he said.