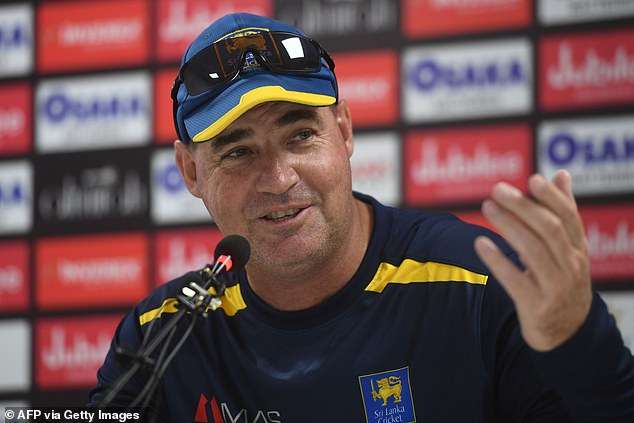 England may be on an upward Test curve following victory in South Africa, but in Sri Lanka they will be up against a coach who has their number.

Mickey Arthur was appointed to lead Sri Lanka across all formats late last year after being overlooked for the England job by the ECB’s director of cricket, Ashley Giles. That was despite Arthur boasting an incredible record of success against England during his time with both South Africa and Pakistan.

Arthur inspired South Africa to their first Test series win on English soil in 40 years in 2008 and led Pakistan to back-to-back series draws in England in 2016 and 2018.
Now, having watched Joe Root’s side win their first Test series in over a year in South Africa, Arthur is out to build on his record and ensure that England’s revival in the longest format is short-lived.

‘My record against England is good,’ Arthur told Sportsmail. ‘I grew up admiring English cricket and everything about the English game. I still think England is the home of cricket.

‘There’s nothing better than playing against them — that inspires me every time I come up against them.’

Arthur insists it will be a trial by spin for England in Sri Lanka, despite talk that the hosts are preparing seam-friendly conditions for their Test wickets after they were beaten at their own spinning game when England won 3-0 here in 2018 — just the third time Sri Lanka had ever lost every Test in a home series.

‘Playing in Sri Lanka is going to be very different to the challenges that England came up against in South Africa,’ said Arthur. ‘We’re going to have three spinners, I would have thought. The breakdown of your team in Sri Lanka would be two quicks, two spinners and then an all-rounder who is a spinner as well. You would generally have a spinner rather than a seamer as your bowling all-rounder.’

Moeen Ali would ordinarily have filled that role perfectly for England. But with the Worcestershire man — who has 181 wickets and more than 2700 runs to his name in Test cricket — having ruled himself out of the tour, England clearly have a hole to fill.

In the 2018 whitewash it was spinners Ali, Adil Rashid and Jack Leach who dominated. The England seamers got just seven wickets between them.

But Arthur insists he will not be asking the groundsman for any help. ‘The pitches will play a role but they’ve been good of late,’ he added. ‘I’m certainly not in the game of wanting massive raging turners from ball one.

‘Your first innings needs to be good. Your spin needs to come into the game on day three and your quicks still need to play a role early on.

‘I like this England side at the moment. They play spin quite well, they sweep and they reverse sweep and they have that ability to move the scoreboard on. It’s important to have batsmen who can transfer the pressure, particularly when you’re facing spin — England have those. We’re going to have to bowl really well against them.’

There might have been a time when Arthur might have expected to be leading England to Sri Lanka rather than the other way round. He admits a discussion was had with Giles before Chris Silverwood was appointed to replace Trevor Bayliss.

Now, Arthur can gauge their progress under Silverwood at close quarters, safe in the knowledge that few people in international cricket have a better idea of how to beat England than he does.