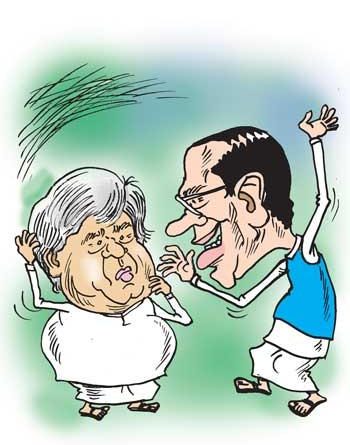 A sporty purohita from Gampaha had the other day a chance meeting with a very high political authority and they soon found themselves discussing the upcoming big poll.

This purohita hailing from a prominent political family was keen on ascertaining whether the high political authority had set his heart on entering the fray once again.

In response to an inquiry he made quite diplomatically, the high authority said: “I am going to contest…Perhaps, I might be the first to file the nominations!”

Then the purohita remarked: “The former boss too has said that he would be fielding a candidate!”

“Yes, he has said so…But watch what will happen once I’ve submitted my nomination papers!” replied the high authority and added after a pause: “What is going to happen will be a radical change! A re-shaping of the entire political scenario!”

The high authority also told the purohita that it was too early for him to give the details adding: “You just await the developments!”

The purohita appeared stunned by this reply, but he made no comment, they say.