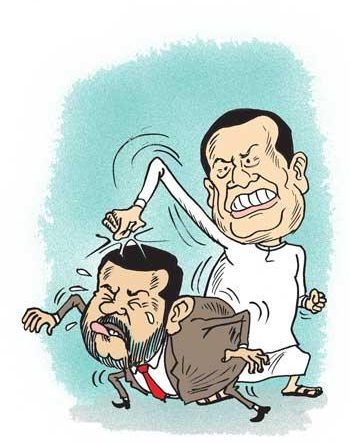 Soon after a no-confidence motion against the government was moved, the group of Muslim politicos, who quit their purohita status called on the Green leader to discuss the new development.

Discussion over, at which the Muslim politico had given an undertaking to support the government to defeat the motion, the group had walked out of the Green leader’s office.

Meanwhile, the Green leader had sent for a Puttalam district Catholic Diyawanna politico who, according to a rumour afloat, had decided to play truant when the no-confidence motion was to be taken up for a vote.

It so happened that as this Catholic Diyawanna member stepped into the Green leader’s office, he met face to face with the Muslim group that was walking out after the discussion. On seeing the Muslim politico of Wilpattu fame at the head of the group, the Catholic member had confronted him and told him:

“What I can’t stick is your utterances! You have been allowed to go scot-free despite the allegations against you! Even if I am compelled to vote against the motion, I will continue to criticize you!”

Angered by this tongue-lashing, the politico of Wilpattu fame had retorted: “If this is going to be your attitude, we may have to reconsider our decision about voting against the motion!”
Livid with anger, the Catholic Diyawanna member had told the Wilpattu politico: “I feel like dashing you on the floor here!”

The Wilpattu politico had walked away making no response to this threat.

The Catholic member’s colleague, doctor-member from Gampaha too had been a witness to this scene, they say.