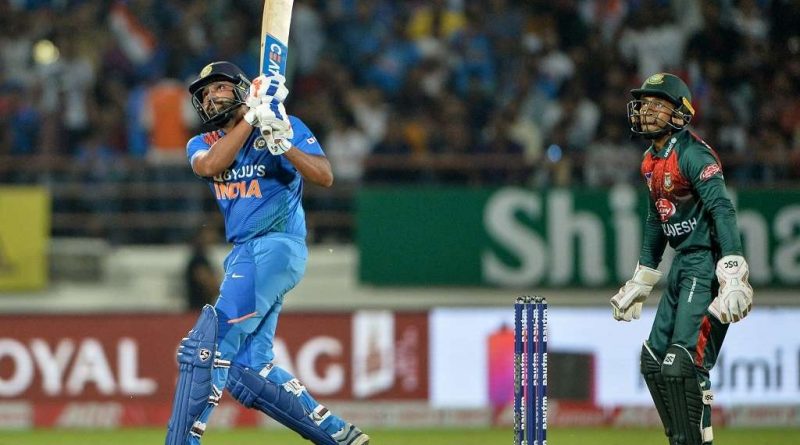 Sports
November 8, 2019 Thanuka 0 Comments
Skipper Rohit Sharma smashed 85 in his 100th Twenty20 international to power India to an eight-wicket series-levelling win over Bangladesh on Thursday.
Sharma put on 118 runs with opening partner Shikhar Dhawan as the hosts achieved their target of 154 in only 15.4 overs in Rajkot to make the three-match series 1-1.
The 32-year-old raced to his fifty in just 23 deliveries, reaching the milestone with his third six.
He hammered six fours and six maximums in total, including three successive hits over the fence off spinner Mosaddek Hossain in his 43-ball blitz.
“I knew that Rajkot is a good track, knew (it) will be difficult for bowlers in the second innings,” said Sharma, who is leading the side in the absence of the rested Virat Kohli.
“We took advantage of that, had a great powerplay. After that, it was all about going on.
“I never underestimate bowlers. All these years, I’ve just tried to do my best with the bat in hand. Knew conditions were perfect, so all I wanted to do was stay still and tonk the ball.” He is the only male Indian cricketer to play a century of T20 internationals and just the second worldwide, with Pakistan’s Shoaib Malik having played 111.
Sharma finally became leg-spinner Aminul Islam’s second victim after being caught at deep mid-wicket.
Dhawan was bowled by Aminul for 31.
Shreyas Iyer, on 24, and KL Rahul, on eight, were at the crease as India won with 26 balls to spare.
Leg-spinner Yuzvendra Chahal set up the victory by taking two key wickets in one over to help restrict Bangladesh to 153 for six after being put in to bat first.
Bangladesh made a flying start with Liton Das and Mohammad Naim, the top scorer with 36, putting on 60 for the opening wicket in 7.1 overs.
Liton benefited from a pair of reprieves, including a stumping chance when a no-ball was called after wicketkeeper Rishabh Pant collected the ball in front of the stumps.
Liton was finally run out by a direct throw from Pant while trying to steal a single after missing a googly from Chahal.
Chahal then struck twice in his third over with the wickets of first-match hero Mushfiqur Rahim, for four, and Soumya Sarkar, for 30, as the tourists slipped to 103 for four.
Bangladesh lost two more wickets, including skipper Mahmudullah Riyad for 30, in the last five overs that resulted in 41 runs.
“Was a very good wicket, but we were 25-30 runs short. Having said that, credit to Rohit and Shikhar, how they started. Momentum went their way,” said Mahmudullah.
“We need to assess the conditions when we go to Nagpur. We needed to be a bit more positive.” The final match is on Sunday in Nagpur.