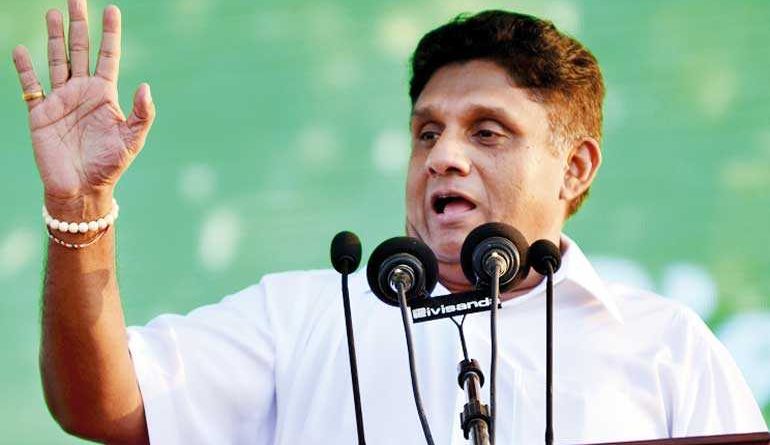 “I am committed to destroying all forms of terrorism in the country. Mr. Fonseka will have to work out plans and strategies to combat terrorism using his extensive experience in fighting the 30-year war,” he said.

“The responsibility of security should be handed over to someone who has experience in the battlefield and had completed the task winning the 30-year-old war. Therefore, we have decided to hand over the defence portfolio to Field Marshal Fonseka,” Mr. Premadasa said.

“He will also be given the task of eradicating drug trafficking in this country,” Mr. Premadasa added.

Mr. Premadasa also pledged to eradicate corruption, wastage and robbing of public funds and added that anyone who does not agree with him on this point can go way now itself.

UNF-led alliance candidate then pledged to come up with youth, women’s and a labour charter and also to introduce a new poverty alleviation programme in addition to Samrudhi. “I will also introduce a farmers’ charter and will ensure a stable price for every crop,” he added.

Also, he tendered a public apology for referring to his mouth as a sacred one (Shri Mukaya). “I thought I should make this apology in front of the masses and here. I appeal for a pardon for the mistake. I should fall at the feet of the people and tender my apology. However, I am doing it now with my hands joined as it is not possible for me to come near each and every one of you,” he said in this regard.

“Our opponents have begun attacking Mr. Premadasa’s father, the late President R. Premadasa. It is my duty to answer these people, as a man, who was close to the late President. He was a person who worked for the ordinary people rather than fulfilling the whims and fancies of the elite,” he said.

He added that a number of new development projects will be carried out including expanding Galle Face Green by reclaiming land from the sea.