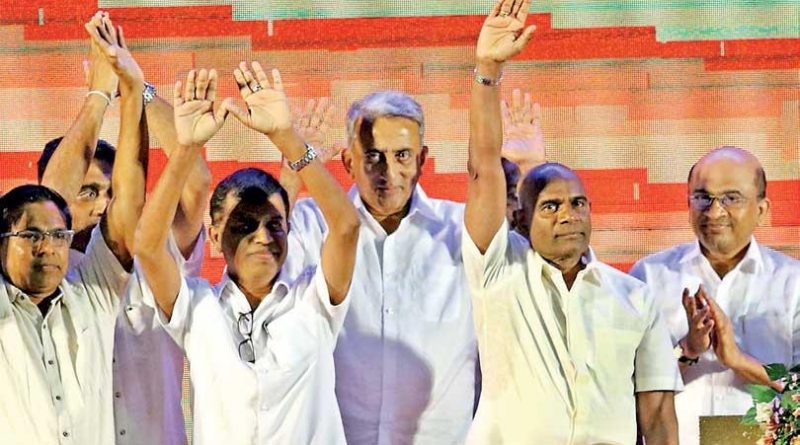 General Mahesh Senanayake was announced as the Presidential Candidate at a convention held yesterday at the Sugathadasa Indoor Stadium.
He is to enter the presidential contest under the theme “Rata Rekumata – Rata Negumata”.  He is the 22nd Army Commander of Sri Lanka.
After the former Army Commander was named as the presidential candidate, he was convened to the stage by former Auditor General Gamini Wijesinghe and former Deputy Director of the State Intelligence Service Dr Ajith Colonne.
Addressing the convention, he said that he had come forward as a presidential candidate in order to safeguard the country which is in turmoil.
He further said he only intended to develop the country together with patriots and he had no self-interest in becoming the president.
Mahesh Senanayake who was a past pupil of Ananda College, joined the Army as a cadet officer in 1981 and had volunteered as a member in the Regiment of Special Force of the Army that began in 1989. He was also a founder of the Long Range Reconnaissance Patrol Force, and acted as the director of planning during the
humanitarian operations.
He received medals such as Rana Wickrama, Rana Soora, Vishishta Sewa Vibhushana and the Uththama Seva. He was dismissed during the previous government without a reason and he returned to the country in 2015 on a request of the present government. He was appointed as the Commander of the security forces in Jaffna in 2016 and in 2017 he was appointed as the Army Commander.
A group of people including the former Auditor General Gamini Wijesinghe, former Deputy Director of the State Intelligence Service Dr Ajith Colonne, retired Army officers, lecturers and scholars participated in this occasion.