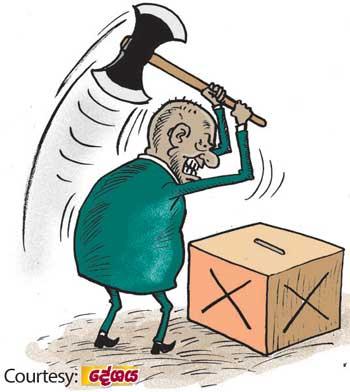 A high-up in the election commission is said to have embarked on a plan to scuttle the already Gazetted poll to the Elpitiya local body, they say.
He had first railed at the Returning Officer concerned for Gazetting the poll without first consulting them. However, the Returning Officer had reportedly given a hard-hitting reply to the high-up.
Meanwhile, the Northern alliance sources say that the high-up has now decided to seek a court injunction against holding this poll saying that the result of it could make an undue impact on the upcoming big poll. He is planning to go abroad after seeking a court ruling on the issue, they say. His absence from the island is expected to lead to loss of quorum in the Commission rendering it unable to take a legally valid decision.
In such a scenario, the commission will be compelled to await his return for them to take any vital decision in regard to the upcoming big poll as well. This strong possibility raises a big question mark over holding the big poll too on time, they say.